It came down to Casey Burton’s final jump attempt to determine her ranking in the state in the Long Jump.  With one jump remaining for the finalists, Casey was seated in eighth place.  Her final jump was not only the best of her attempts of the day, but the best overall in the field and won the event with a jump of 19’ 1’, a jump three inches better than the runner-up and the rest of the competitive field.  Burton stood on the podium as PA Indoor State Champion.  Casey also placed 18th in the 200m Dash and was unable to qualify for the finals in the 60m Dash.

This concludes the indoor season for the Tigers and these three successful seniors will be leading their teams heading into the outdoor season which begins March 2. 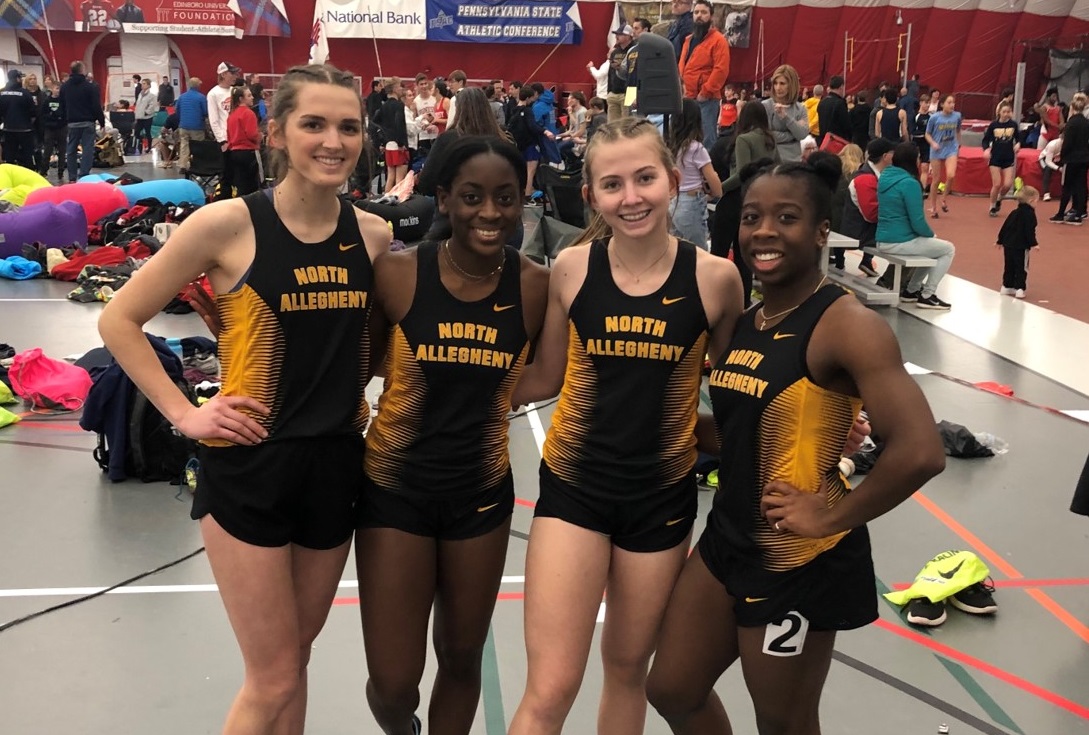 Casey Burton continued to dominate the 60m Dash and Long Jump events as she won both again on Saturday. Her leap of 19’ 4 ½ ” currently places her as the top ranked high school girl long jumper in the state.   Keeley Misutka ran extremely well by placing 2nd in the Mile Run and 4th in the 3000m Run.

Other notable performances for the Girls team included Aveline Plenter-Krelling racing to a 7th place finish in the 60m High Hurdle race and Evelyn Wiethorn High Jumping to a 4th place finish.

A pair of High Jumpers were the only top finishers for the Boy’s team.  Isaac Burt captured 3rd place while teammate Owen Curran was able to finish in 5th place.

The next competition for the Tigers will be this Saturday’s TSTCA Championship meet at Edinboro University.

Several Tigers traveled to Edinboro University to compete in the largest TSTCA indoor meet so far this season.

The dynamic duo of seniors Casey Burton and Hannah Lindgren continued to dominate their respective events.  Casey was able to win her three events in the 60m and 200m Dashes along with the Long Jump.  Hannah won both of her distance events, the One Mile Run and 3000m Race.  The only other individual female Tiger to finish in the top eight was Evelyn Wiethorn earning eighth-place honors in the High Jump.

The Tigers will continue their competitive bouts at Edinboro University when they return again on Saturday, Feb. 15.

Senior Casey Burton had another electrifying performance Friday night at Edinboro University’s Zafirovski Dome.  She finished with top honors in the 60m Dash just ahead of two freshmen girls, each from Shaler Area and Upper Saint Clair.  Burton also won the Long Jump, besting the next best competitor by over a foot and a half.  She finished the night with a second-place performance in the 200m Dash.

Hannah Lindgren posted some solid performances on the track as well.  Lindgren finished second in both the One Mile Run and the 3000m Run. Off the track Ava Como secured a fourth place performance in the Pole Vault and Briona Rice leaped to a sixth place finish in the Triple Jump.

The Tigers return again to Edinboro University to compete in the TSTCA #5 meet on Saturday, Feb. 8.