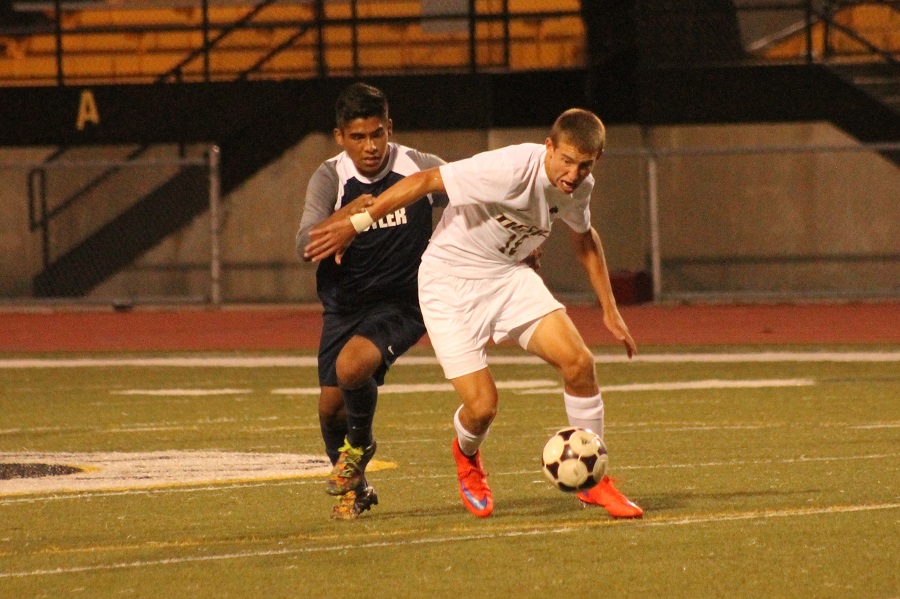 NA Upended By 14th-seeded Kiski In First Round, 2-1

North Allegheny’s stay in the WPIAL playoffs came to an abrupt end on Monday night as the 14th-seeded Kiski Cavaliers upset the favored Tigers, 2-1, in the opening round of the playoffs. It was the Tigers first loss since September 8 and snapped an incredible 15 game unbeaten streak for the team.

Despite starting the 2015 campaign with a 2-6-2 record, including a 6-1 loss to North Allegheny on opening night, the Cavaliers ended the regular season having won five of their last eight games and playing their best soccer of the season entering the post-season. Kiski rode that momentum to an early lead in their playoff meeting with the Tigers. A little over six minutes into the game, junior forward Drake Neumann netted the first goal of the night against NA goalie Grant Glorioso to give the Cavaliers a 1-0 lead.

Even though they were stunned early on, the high-powered Tigers put continued pressure on the Cavs and eventually tied the game at 1-1 when sophomore Josh Luchini broke free behind the defense and Kiski goalie Nicholas Bisceglia, and tapped the ball into the back of the net with 19:37 remaining in the first half. Luchini’s goal was his 13th of the season and earned him Wright Automotive Player of the Game honors from the North Allegheny Sports Network.

On the marker by Luchini, Bisceglia collided with defenseman Garrett Shaffer and both were carried off the field with apparent leg injuries. While Shaffer later returned to the contest, Bisceglia did not come back to the game which left freshman goalie Nicholas Smith in net.

The third-seeded Tigers seemed poised to gain control of the game, especially facing an inexperienced freshman keeper. However, Smith did not buckle in his first varsity action and kept North Allegheny off the board for the remainder of the game.

With just under two minutes remaining in the first half, Kiski was granted its second and final corner kick of the game. While the Cavaliers didn’t have many scoring opportunities, they did capitalized on the few they had and senior Adam Malagari netted the go-ahead goal off the corner kick with 1:39 to play in the half to give Kiski a 2-1 lead.

Undaunted, the Tigers set an all-out assault on the Kiski net and peppered Smith with shots in the second half. The field was tilted in NA’s favor for the remainder of the game and produced several scoring opportunities, including a shot by Luchini that missed high and wide to the right with 14:30 to play. Senior Michael Peters received little space to work with from the Kiski defense, but he did manage to get free for a good shot on net with 7:20 to play but Smith stepped up to make the save. With four minutes to play, Jack Passodelis had a good look at the net but again Smith kept the Cavs in front, 2-1.

While North Allegheny applied continued pressure in the second half, Kiski’s defense allowed few uncontested shots. North Allegheny outshot Kiski, 14-3, and led in corner kicks, 10-2. Despite the heavy advantage in both categories, the Tigers could not find the equalizer and the Cavs held off favored North Allegheny for a 2-1 upset. The win was Kiski’s third playoff victory against the Tigers in the last six seasons.

Kiski improves to 8-9-2 with the win and advances to the WPIAL quarterfinals to face the Allderdice Dragons on Thursday night. North Allegheny’s season ends with a 13-2-3 record. The Tigers playoff appearance was their sixth straight and marked another fine season under head coach Bobby Vossmaer. Congratulations to the North Allegheny boys’ soccer team for another exciting season and best of luck to the NA seniors in their future endeavors.