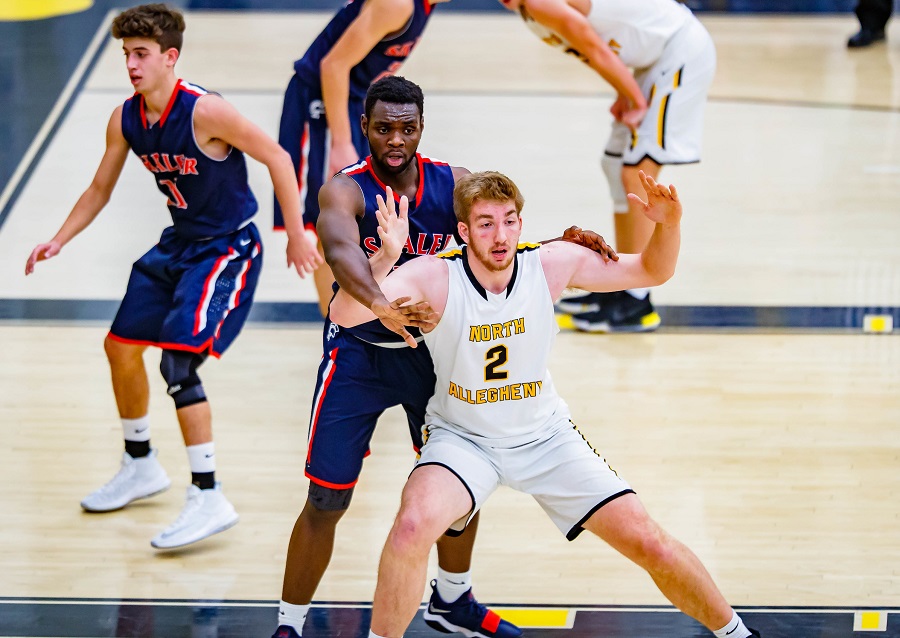 The North Allegheny boys’ basketball team used a big fourth quarter to capture its first section win of the season with a 54-41 decision over the Seneca Valley Raiders on Monday night. Leading 34-33 going into the fourth quarter, the Tigers outscored the Raiders 20-8 in the final stanza to seize their 20th consecutive win in the head-to-head series over their section rival.

Four players reached double figures for the Tigers, including senior Zach Johnson who scored a game-high 13 points and did most of his damage in the last quarter. The 6-10 Johnson was a matchup nightmare for Seneca Valley and added eight rebounds to his stat line. For his efforts, Johnson was named the Wright Automotive Player of the Game.

Joining Johnson in double digits were Anthony Hattrup and Mike Iuzillino who netted 12 points each, and senior Curtis Aiken who posted 11 points. The Tigers also had a successful night at the free-throw line, knocking down 19 of 26 attempts. Hattrup shot 8 of 9 from the charity stripe and Iuzillino was a perfect 4 for 4.

For Seneca Valley, David Ritchie totaled a team-high 11 points and senior Jacob Banofsky added 10 points. The Raiders slide to 8-3 overall and 2-3 in Section 1-6A following the loss.

North Allegheny improves to 3-7 overall and 1-4 in section play. The Tigers look to continue their turnaround tonight with a visit to North Hills to take on the last-place Indians.