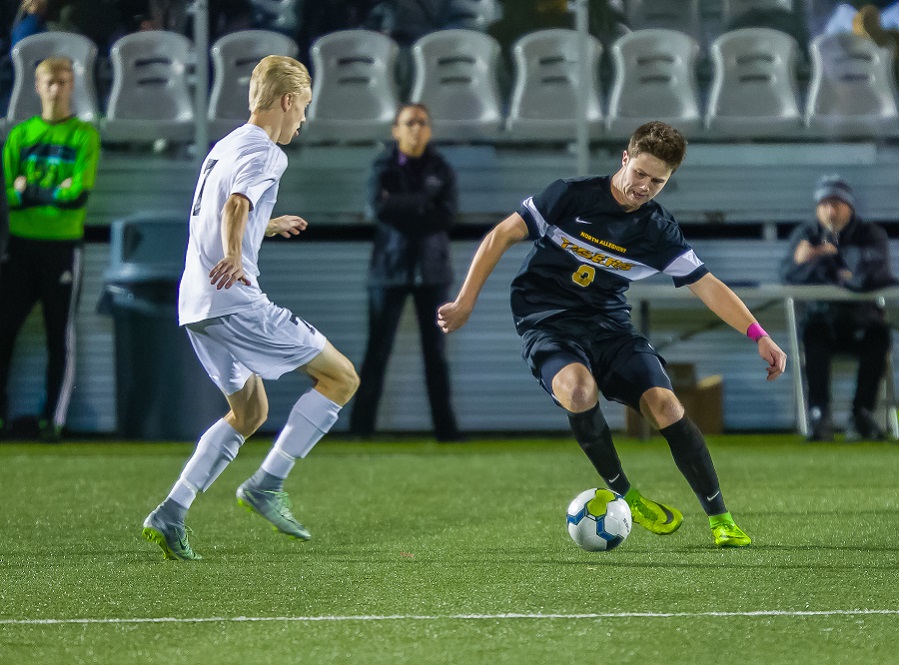 Tuesday night’s PIAA First Round matchup between North Allegheny and Pine-Richland was a rematch of the WPIAL semifinals on October 29. The game was played at the same neutral site, Mars High School, and ended in the same fashion as junior Sean Atwater delivered an overtime game-winning goal to lift the Tigers to a 2-1 victory over the Rams. It’s the third-straight playoff game Atwater has ended with an overtime goal and it’s the fourth overtime win in the postseason for the Tigers. (A video of Atwater’s game-winning goal is provided below.)

In the first half, both teams played a conservative game that yielded few scoring chances. North Allegheny had the best of the opportunities and nearly scored with 10 minutes left in the half when Jack Passodelis uncorked a strong shot but was denied by Pine-Richland goalie Tom Fest. The Tigers had another good scoring chance with 3:30 remaining in the half but a shot by Sam Buirge missed wide right and the game stayed deadlocked at 0-0 entering halftime.

In the second half, senior Ben Cinker scored his team-leading 12th goal of the season, assisted on a terrific pass from Cam Yurick, to give North Allegheny a 1-0 lead with 34:58 on the clock. It took Pine-Richland only four minutes to even the score as senior Carlo Tozzi sent a crossing pass through the box to Niko Marsh who drove the ball inside the left post to tie the game at 1-1.

The game remained tied and went to overtime, the eighth time in the last nine meetings between NA and Pine-Richland that overtime was needed. The Rams tilted the field in their direction in the first overtime and had a great opportunity to win it on a shot by Tozzi with 10 minutes remaining. However, senior goalie Grant Glorioso made another clutch save in the playoffs, diving to his left to deflect the ball wide of the net. With 1:14 to play in overtime, Nicholas Shideler dribbled deep into the box  but drove his shot off the side of the net.

The contest went to a second overtime and came to an abrupt end when North Allegheny was awarded a free kick from 40-yards away from the Pine-Richland net. Atwater took the free kick and lofted a high-arching ball that fell just beyond the reaching hands of Fest and into the net for a North Allegheny win, 2-1. For his efforts, Atwater was named the Wright Automotive Player of the Game.

North Allegheny improves to 16-2-5 on the season and advances to the PIAA quarterfinals for another rematch against a familiar foe, the Seneca Valley Raiders. The game will be played on Saturday at a site and time to be determined. Pine-Richland’s season concludes with a record of 13-7-3.