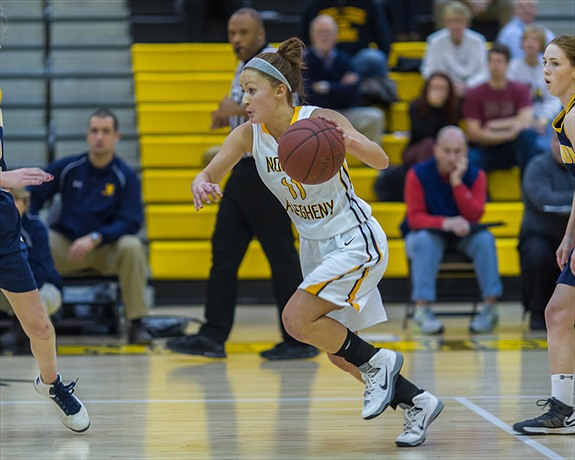 North Allegheny shot 8 of 10 from beyond the arc on Tuesday night to sink the Oakland Catholic Eagles, 60-34, for a Section 3-AAAA victory. Junior Devvin LaBarge poured in a game-high 16 points, connecting on 4 of 5 shots from three-point land to aid NA’s cause. Senior Taylor Brennan connected on a trio of treys and was a menace to Oakland Catholic defensively, corralling six steals and six rebounds. For her efforts, Brennan was name the Wright Automotive Player of the Game.

Thanks to Brennan and LaBarge, North Allegheny opened up a 10-1 lead to start the game, but Oakland Catholic’s ability to score in transition led them back. Junior Taylor Renk scored five points during an 11-0 run that put the Eagles ahead, 12-10, heading into the second quarter.

As they did to start the opening stanza, the Lady Tigers used a barrage of points to begin the second period for a 13-2 run that gave NA a 23-14 lead.  The avalanche continued in North Allegheny’s favor for the remainder of the game as the Tigers cruised to the victory in the second half, outscoring Oakland Catholic 27-11 over the final 16 minutes. North Allegheny did not yield a single point in the fourth quarter.

The Lady Tigers’ third win in a row gives them a 4-1 record overall and 2-0 mark in the section. Oakland Catholic falls to 1-3 overall and 0-2 in section play. North Allegheny visits Butler on Thursday night with a 7:30 pm tip-off.