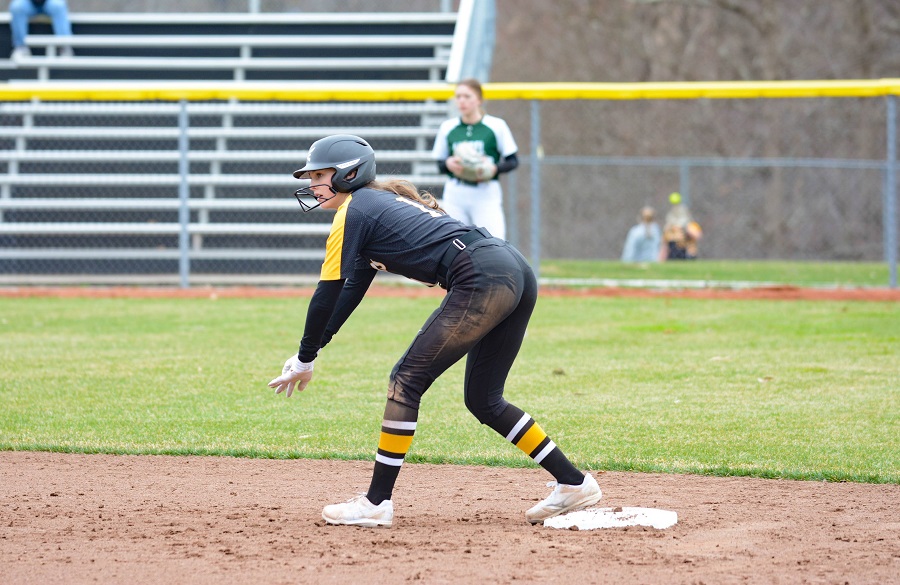 A seven-run third inning helped propel North Allegheny to a 13-2 home win in five innings over Connellsville on Saturday afternoon. It’s the third straight victory for the Tigers to open the 2022 season.

After two scoreless innings, the Falcons struck first in the top of the third inning on a two-out RBI single by sophomore Iris Burd for a 1-0 lead.

Burd, who was also the starting pitcher for Connellsville, retired the first eight batters she faced before a two-out infield single by Carlyn Vaupel spelled trouble for the Falcons righthander in the bottom of the third. Following a walk to Alaina Whipkey, junior Meghan McDonough drove a deep fly ball off the fence in right-center field to score both Vaupel and Whipkey for a 2-1 lead.

In all, nine consecutive batters reached base after two outs in the bottom of third inning as the Tigers piled up the runs. Later in the frame, a bases loaded walk by Caitlin Logan extended the lead to 3-1 and Ali Domachowski followed with a bases loaded hit by pitch to increase the lead to 4-1. A two-run single by Mayson Brokos and an RBI single courtesy of Sadie Kelly grew the NA advantage to 7-1.

Connellsville had a chance to answer back in the top of the fourth inning with the bases loaded and only one out. Melle, who got the starting nod in the circle for NA, struck out Morgan Adams for the inning’s second out. Maddie Kinneer was the next batter and hit a sinking fly ball to shallow left field but was denied on a great diving catch by Whipkey who ranged over from her shortstop position to squash the Connellsville threat.

From there, the Tigers pulled away and cruised to the win. In the bottom of the fourth, an error allowed Whipkey to score and an RBI single by Annalyn Isaacs increased the NA lead to 9-1. Connellsville’s Mallory Orndorff smacked a solo home run to centerfield to trim the score to 9-2, but North Allegheny invoked the 10-run rule in the bottom of the fifth with a four-run frame. A double steal allowed Kelly to score for a 10-2 lead. Rachel Rusnica followed with an RBI single and Melle ended the game with a two-run homer for a 13-2 win.

McDonough was named the Wright Automotive Player of the Game, going 2-for-4 with two RBI, two runs scored and sparked the offensive showcase with her triple in the third inning.

Melle was the winning pitcher with a complete five innings of work and allowed only two runs, one earned, with 10 strikeouts and two walks. Burd was the losing pitcher for Connellsville and lasted only into the fourth inning.

North Allegheny improves to 3-0 overall with the win, while Connellsville falls to 1-2. The Tigers are slated to host Seneca Valley on Monday at 5:00 p.m. Weather permitting, the game will be broadcast live by the North Allegheny Sports Network.