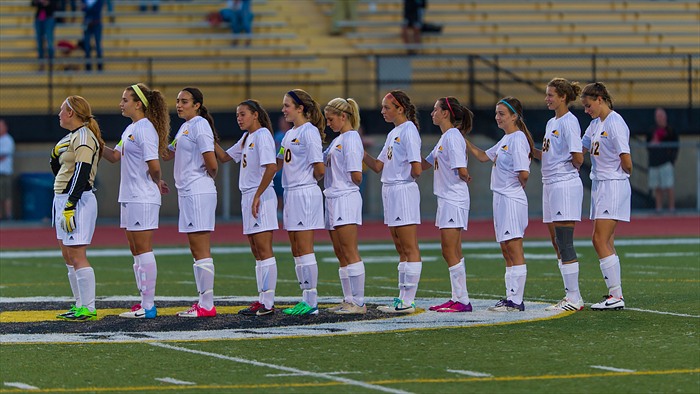 Playing without several of their starters, the North Allegheny Girls Soccer Team fell to the Canon-McMillan Big Macs on Saturday afternoon, 3-1, in a non-section contest.  There was no scoring in the first half with both teams trading chances but neither able to capitalize.  The Lady Tigers had a good scoring chance in the 25th minute when Megan Van Kirk served a ball in front but no NA player could finish, leaving the game scoreless at halftime.

In the second half, the game opened up with the Big Macs having the better of the play. Early in the half, Canon-McMillan took the lead in the 4th minute on a goal by Allie Thomas.  The Tigers tied the game in the 23rd minute on a Marina Thornton goal, but the Big Macs responded a minute later to retake when freshman Sabrina Bryan fed a pass to fellow freshman Aideen O’Donoghue for the go-ahead goal.  The Big Macs capped the scoring on Bryan goal in the 29th minute for the a 3-1 win.

The Lady Tigers fall to 14-2-1 on the season with the non-section loss.  Canon-McMillan improves to 11-3-3 on the year.  North Allegheny hosts Norwin in another non-section affair on Tuesday night.  The game will be broadcast live via the internet on the North Allegheny Sports Network.