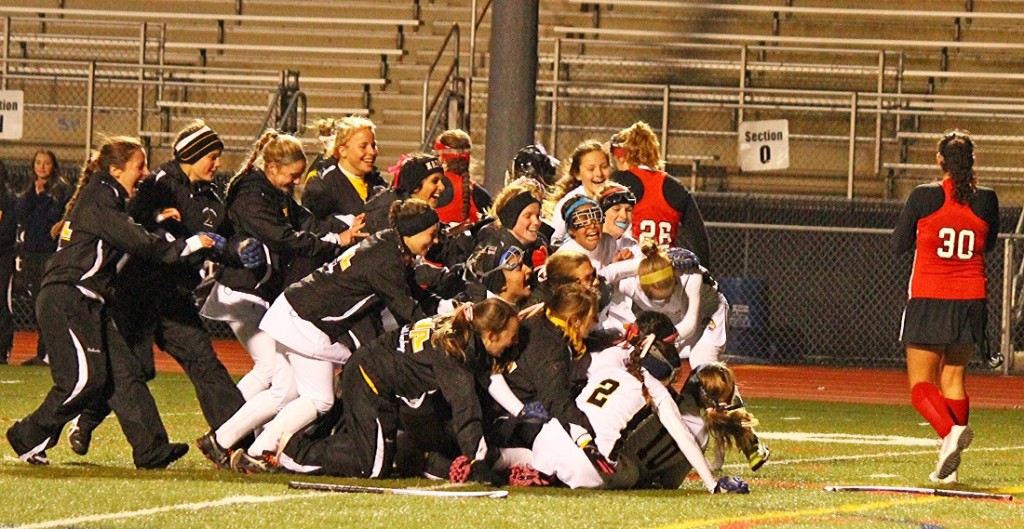 North Allegheny junior Jessica Brandon scored with 2:31 to go in double overtime to lift the Lady Tigers to a 1-0 victory over the Peters Township Indians on Wednesday night in the WPIAL semifinals. The goal came just moments after Peters Township had a near breakaway by Elizabeth Hill, but NA goalie Morgan Mendenhall aggressively played the ball to prevent the Indians from a potential game winning goal.  Brandon’s goal was her team-best 12th of the season.  For her efforts in scoring the game winning tally, Brandon was named the Wright Automotive Player of the Game.

North Allegheny head coach Maddy Berkley and Peters Township head coach Mary Rae Rocco both stressed prior to the game that they wanted to see their respective teams open the contest with a quick goal to build early momentum.  Little did anyone know it would take over 75 minutes of play before the first and only goal was scored. Sticking to the game plan, North Allegheny opened the first ten minutes of play by dictating the action in the Peters Township end.  The Lady Tigers had three penalty corner opportunities but came away empty thanks to a stingy Indians defense that built a wall in front of sophomore goalie Melanie Stevans. Weathering the early NA storm, the Indians began to settle into the game and forced the issue during the final 15 minutes of the half.  Senior Jenna Jaworski, who played for coach Berkley the last two seasons for the Golden Triangle at the National Festival, helped lead the charge for the Indians late in the half. Like the Tigers in the early going, Peters Township had nothing to show for their momentum and went to halftime in a scoreless tie.

In the second half, junior forward Kailey Vogl played with a fiery intensity and helped NA to four penalty corner chances. Vogl, along with senior Bree Monnin, and juniors Hannah Downing and Megan Guzzardi, all kept NA in control of the field in the second half and throughout both overtime periods.  Despite the field being significantly tilted in NA’s favor, the Indians did break through for a pair of penalty corners and the occasional fast break courtesy of crisp passing from Theresa Marr, Samara Schratz, Rachel Windmueller, and Madison Woodrow.

As the first overtime turned into a second extra period, both teams were pressing for the sudden death goal. In the second OT, Peters Township nearly scored the game winner when a steal and long pass into the NA end was chased down by Elizabeth Hill, but Mendenhall outraced Hill to the ball near the top of the circle to prevent Hill from obtaining a clean breakaway shot on net. Moments later, Brandon broke free for a one-on-one with Stevans and lifted a shot over the PT goaltender with 2:31 to play in double overtime to send NA to the WPIAL Championship Game.

North Allegheny improves to 13-3-1 overall, while Peters Township ends its season with a 9-7-1 record. In the WPIAL title game, the Lady Tigers will face the same team that knocked them out of the post-season a year ago, the Fox Chapel Foxes.  North Allegheny’s opportunity for revenge is Tuesday night at Newman Stadium with a WPIAL championship on the line. Start time is slated for 8:00 pm.  The game will be broadcast live via the internet on the North Allegheny Sports Network.