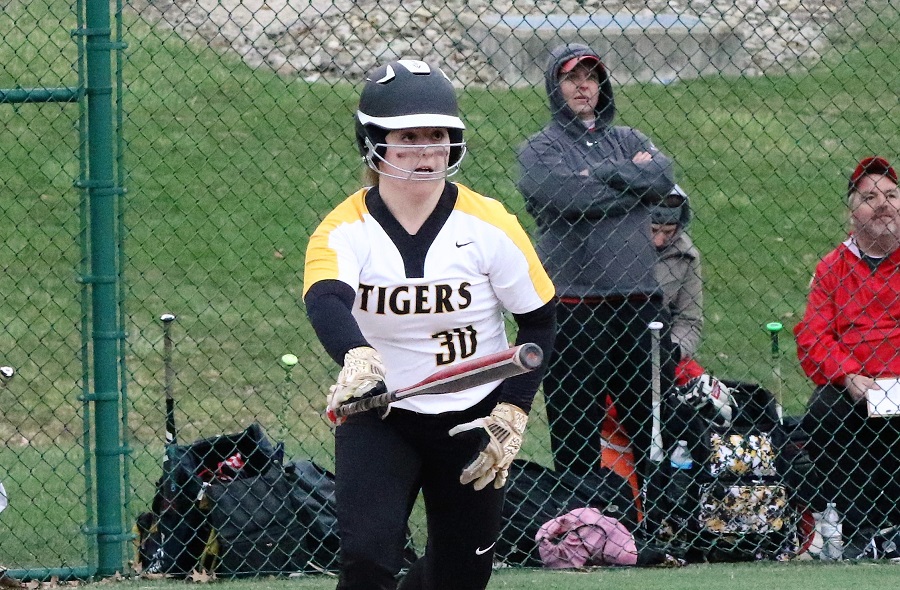 Behind a 22-hit attack, the North Allegheny softball team erased an early three-run deficit for a 15-4 triumph over the North Hills Indians on Friday at McIntyre Field. North Allegheny punished North Hills’ pitching all afternoon as twelve different Tigers collected hits in the Section 3-6A victory.

After pounding Butler yesterday for a 16-10 section win, it was North Hills who started off swinging the hot bats and opened up a three-run lead by the second inning. Maddie Traub scored on a wild pitch in the first inning and Melanie Taylor tacked on a two-run double in the second inning to give the Indians a 3-0 lead.

Undaunted, the Tigers answered back in the top of the third inning with a two-out, three-run homer by Regan Brodine to tie the game at 3-3. Finishing 2 for 4 on the afternoon and providing the game-changing home run, Brodine was named the Wright Automotive Player of the Game.

The Tigers lineup hung another crooked number on the scoreboard in the fifth inning with a five-run frame for a 12-3 advantage. The inning was highlighted by a pair of two-run singles, one courtesy of Lauren Haywood and the other from Anna Pilotta.

While North Hills picked up a run in the bottom of the fifth when Anna McNickle scored on a wild pitch to trim the score to 12-4, North Allegheny put the game on ice with three more runs in the top of the seventh for a 15-4 victory. In the seventh, Chloe Szczepaniak contributed an RBI single and Sophia Dollard added a two-run base hit.

In the pitcher’s circle, Adams got the starting nod for North Allegheny and earned the victory with 4.1 effective innings. Dollard pitched the final 2.2 innings in relief and permitted just one hit while striking out five batters and walking only one. For North Hills, Anna McNickle took the loss and was tagged with seven unearned runs in three innings. Lauren Barnes allowed eight runs, six earned, in four innings of relief for the Indians.

North Allegheny improves to 2-2 overall and 1-0 in Section 3-6A. North Hills suffers its first loss of the season with a 2-1 overall record and 1-1 section mark. The Tigers are scheduled to host the Butler Golden Tornado on Monday night at 6:00 p.m. in another section battle.