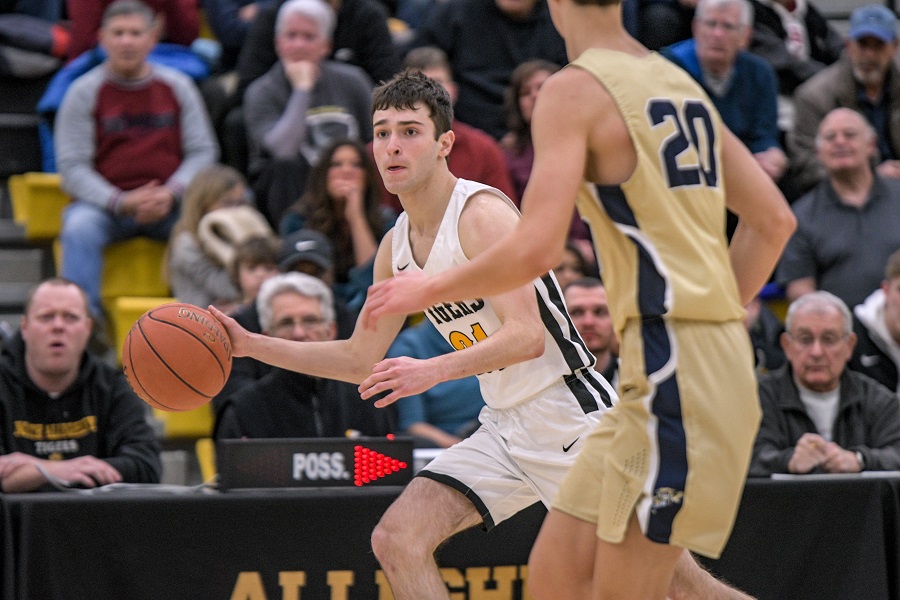 Fifth-ranked Butler snapped North Allegheny’s winning streak at four with a 59-44 win at NASH on Tuesday night in Section 1-6A action. Junior standout Ethan Morton led the Golden Tornado with 29 points and 13 rebounds to remain in sole possession of second place in the section.

After playing Butler tough on the road earlier in the season on Dec. 21 in a 72-65 defeat, the Tigers were hoping to upend the Tornado on their own home floor. North Allegheny built a 7-4 lead in the first quarter on the strength of junior Mike Iuzzolino, who scored NA’s first seven points on his way to a team-high 22 points.

North Allegheny fell behind by 18 points early in the third quarter before finally finding a rhythm offensively. The Tigers were aided by the mid-range jumpers of senior Nico Erimias, who scored all nine of his points in the second half, sparking a 9-2 run that cut the score to 35-24, Butler. Erimias added five rebounds and a pair of steals on his way to Wright Automotive Player of the Game honors.

Despite the NA spurt, Butler kept Tigers at arm’s length for the rest of the game and prevailed for a 59-44 win. Joining Morton in double digits was Mattix Clement and Luke Patten, scoring 12 and 11 points, respectively.

Following the loss, North Allegheny slips to 9-5 overall and 3-3 in Section 1-6A. Butler improves to 12-4 overall and 5-1 in the section. The Tigers travel to Pine-Richland for another section contest on Friday night.