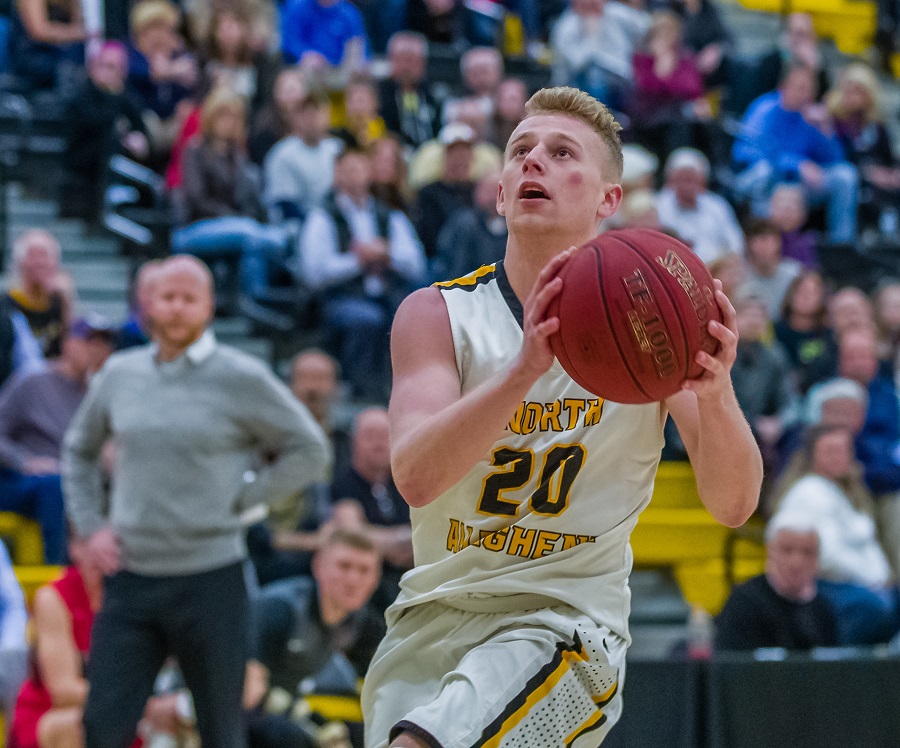 In a battle of two top-10 teams in Class 6A, the Butler Golden Tornado topped the North Allegheny Tigers on Tuesday night, 68-55. The win gives the 10th-ranked Golden Tornado a season sweep over the No. 5 Tigers. Butler junior Connor Ollio led all scorers with 18 points and added five rebounds.

North Allegheny and Butler traded shots in the opening salvo and were tied 10-10 late in first quarter. Butler used a 10-0 run to take a 20-10 lead in the second quarter thanks in large part to the efforts of Tyler Frederick. The senior forward netted nine points in the first half on his way to a 16-point performance for the Golden Tornado.

Butler took a 27-19 lead into halftime and increased its advantage to 32-21 early in the third quarter. However, North Allegheny cut the deficit to 39-33 by the start of the fourth quarter. Junior guard Ray Sandherr played a significant role in keeping the Tigers in the game, posting 19 points and three 3-pointers. For his efforts, Sandherr was named the Wright Automotive Player of the Game.

Along with Sandherr, senior Isaac Barnes netted double figures with 11 points and added seven rebounds for the Tigers. Despite NA’s best efforts, Butler pulled away in the fourth quarter for a 68-55 victory. Freshman Ethan Morton and Joel Stutz were a combined 18 of 22 from the free-throw line to close out the win and netted 15 points apiece. Butler forced NA into 18 turnovers and led in the points-off-of-turnovers category, 30-9.

North Allegheny slips to 11-6 overall and 5-4 in Section 1-AAAAAA. Butler jumps to 11-7 overall and 5-5 in the section. The Tigers look to bounce back on Friday night with a visit to Central Catholic. Opening tip is set for 7:30 at Alumni Hall.