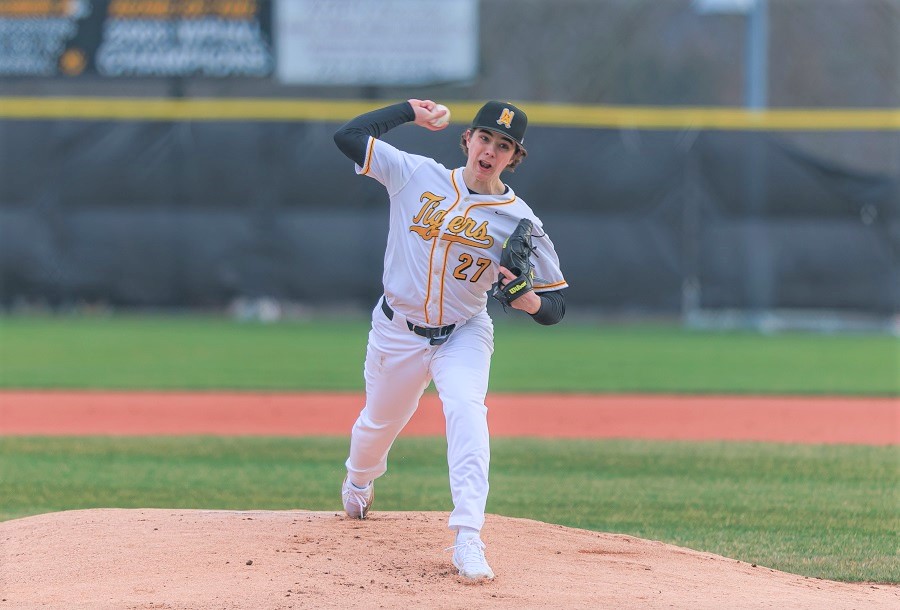 Junior Cam Ward tossed six innings of shutout baseball to help North Allegheny blank the Seneca Valley Raiders on Monday night, 4-0, in the Section 1-6A opener. The right-hander permitted only four hits and a walk, while striking out eight batters to earn his first varsity victory. Ward also provided exceptional defense on the mound by catching two line drives to initiate a pair of inning ending double plays, sealing his Wright Automotive Player of the Game recognition. Junior righty Andrew Hart pitched a scoreless seventh to secure the shutout.

With the Raiders bats held at bay, the Tigers lineup chipped away at Auburn University recruit, Owen Yarussi, and scored the first run of the game in the bottom of the first inning. With one out, Cole Young belted a double off the right-centerfield fence and advanced to third on a passed ball. Spencer Barnett followed with an RBI single to score Young and North Allegheny led, 1-0. Young finished with a 2-for-2 performance at the plate with a double, triple and a walk.

North Allegheny maintained its one-run lead before creating some breathing room in the bottom of the fourth. Aaron Posey led off the fourth with a walk and was substituted by courtesy runner Brody Meyers. Two outs later, Hart singled and a double steal by Meyers and Hart put runners at second and third. Senior Erik Sundgren followed with clutch two-run, two-out single to give the Tigers a 3-0 lead.

In the bottom of the fifth, junior Harron Lee led off with a single and Young reached base for the third time in the game with a walk. Two outs later, Aaron Galaska singled to load the bases. Another passed ball on Seneca Valley catcher T.J. Border allowed Lee to score for NA’s fourth and final run in a 4-0 victory.

Yarusso pitched well but was saddled with the loss for Seneca Valley, allowing four runs, three earned, on eight hits with four strikeouts and a pair of walks. Nick Merola pitched one scoreless frame of relief for the Raiders.