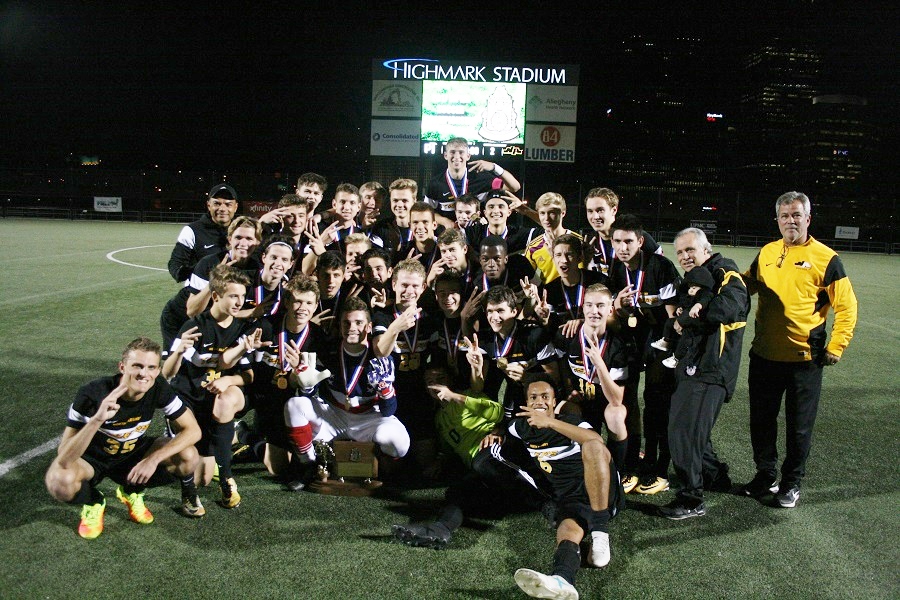 Cam Yurick’s goal with 5:31 remaining in the game lifted North Allegheny to a stunning 2-1 victory over the top-seeded Peters Township Indians in the WPIAL Class AAAA championship at Highmark Stadium in Pittsburgh. Peters Township led most of the game but a bad bounce tied the score with 7:17 left to play and Yurick’s goal less than two minutes later helped the Tigers capture their second straight WPIAL crown and ninth in program history.

The similarities between the 2016 and 2017 Class AAAA championship were eerie. Again North Allegheny faced an undefeated an opponent and managed to steal victory from the jaws of defeat. Last year it was Seneca Valley that fell 2-1 in overtime to the Tigers. Last night in Station Square, it was the Indians who fell victim to NA’s late-game heroics.

In the first half, Peters Township used its team speed to break free for the game’s first goal. Senior forward Bryce Gabelhart streaked down the left sideline and sent a pass in front to Saint Francis University recruit Luke Kelly who drove home the go-ahead goal with 24:47 left in the half. Kelly’s marker gave the Indians a 1-0 lead.

The Indians, led by Big 56 Conference Section 2-AAAA Coach of the Year Bobby Dyer, played outstanding defense and stymied North Allegheny in the first half. The Tigers put forth persistent pressure but defenders, like seniors Moritz Woelk and Kyle McFerran, prevented any open looks in front.

In the second half, the Tigers offense continued to force the issue and finally broke through on a fortunate bounce that turned the tables in this title tilt. In the 73rd minute, North Allegheny floated a ball through the middle of the field where Woelk passed the ball back toward his own net. The ball deflected off of goalkeeper Derek Deyarmin and into the net to even the score at 1-1.

With Peters Township still in shock, North Allegheny capitalized for another goal less than two minutes later. Senior Josh Luchini raced into the box from the left side and threaded the needle with a perfect pass to Yurick for his 15th goal of the season and a 2-1 lead with just over five minutes remaining. The Tigers put the squeeze on the Indians in the waning minutes and held on for the one-goal victory for the Class AAAA title.

With the win, North Allegheny improves to 19-2-1 overall and will face the Pine-Richland Rams on Tuesday in the first round of the PIAA playoffs. Peters Township slips to 17-1-1 on the year and will take on the winner between District 10 champion McDowell and District 6 champion Altoona in a subregional playoff game.