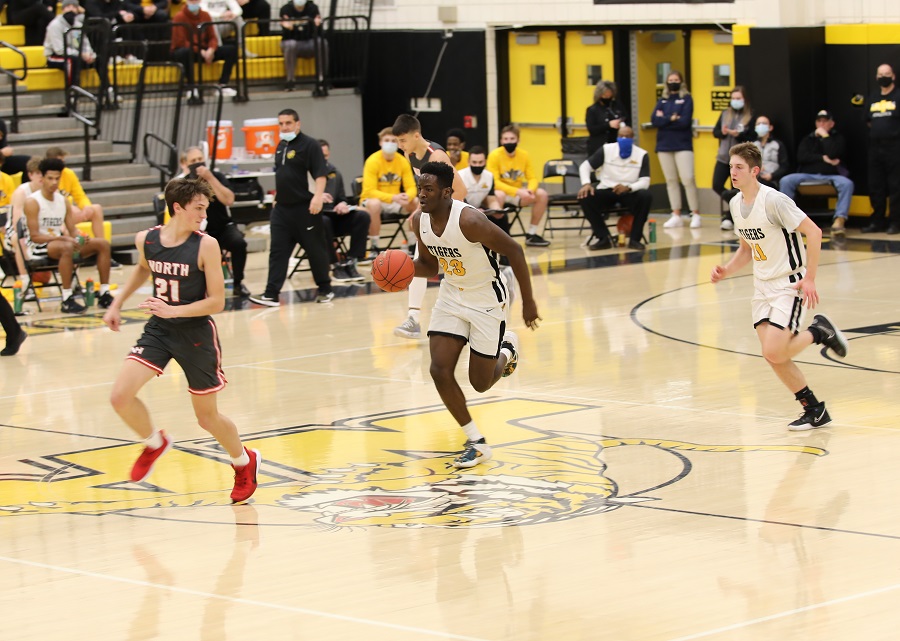 In the early going, senior Greg Habib powered the Tigers with 14 points in the first quarter, including the team’s first 10 points on the night, to help NA construct a 20-16 lead. Senior Khalil Dinkins took over in the second quarter with a commanding effort in the paint, netting eight points in the period, and the Tigers extended the lead to 38-26 at the half. Senior Ethan Lake provided good minutes off the bench and contributed seven points in the first half.

A Dinkins layup to open the second half increased the NA advantage to 40-26 in the first minute of the third quarter. North Hills, however, chipped away at the 14-point deficit and eventually took a 61-57 lead with just over four minutes to play in the fourth quarter. The Indians were paced by junior guard Alex Smith and 6’6” freshman forward Royce Parham, who each netted 20 points on the evening.

The Tigers answered back with a 5-1 run to tie the score at 62-62 before North Hills senior Ethan Chmura buried a 3-pointer with 1:11 to play for a 65-62 lead. NA responded with a 3-pointer by junior Robby Jones to even the score yet again, 65-65, with 50 seconds remaining in regulation. It appeared Matt Seidl might vault North Hills into the lead once more, but his drive to the basket in the waning seconds was denied with a game-saving block by Dinkins.

In the overtime, Dinkins took over the contest with his inside dominance and helped NA outscore North Hills 9-0 in overtime for a 74-65 victory. Dinkins totaled a double-double, posting 25 points and 11 rebounds to earn Wright Automotive Player of the Game honors.

The win pushes North Allegheny’s record to 7-2 overall and 5-0 in Section 1-6A action. It’s the best start for NA since the 2015-2016 season when the team also started the season with a 7-2 record. The Tigers will host second-place Seneca Valley in an important section showdown on Friday night at 8:00 p.m. The game will be video streamed by the North Allegheny Sports Network.