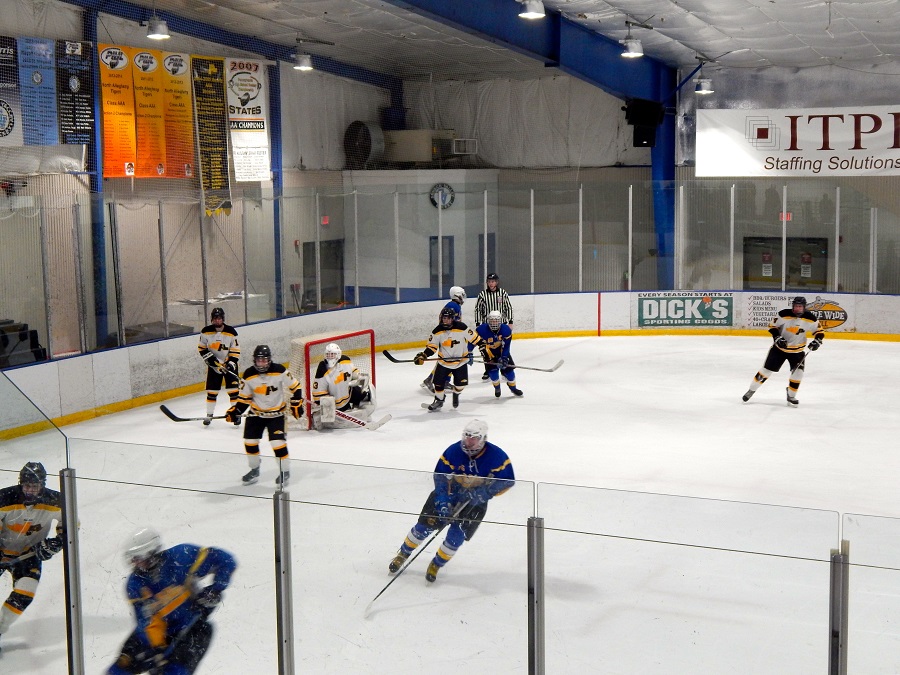 William Carr’s natural hat trick in the third period helped North Allegheny to a 7-3 victory over the Canon-McMillan Big Macs on a snowy Friday night at the Baierl Ice Complex. Canon-McMillan trailed North Allegheny most of the night but cut the Tigers lead to 4-3 with a Brett Morgan goal early in the third period. That’s when Carr drove the Tigers toward victory with three straight markers to cap NA’s fifth win in a row.

North Allegheny took a 2-0 lead with a first period goal by Dawson Richard and a goal by Cameron Sunseri 1:22 into the second period.  The Big Macs answered to tie the game with back-to-back goals by Jacob Clendaniel and Jacob McClelland, the second of which coming on a power play with 6:07 to play in the period. The Tigers grabbed the lead back thanks to another goal by Richard and made  it 4-2, North Allegheny, when Nathan Taylor tallied a power play goal to end the second period.

Despite Morgan’s goal that cut the NA lead to 4-3 early in the third, Carr and the Tigers were able to pull away in the final stanza.

The NA offense peppered Canon-Mac goalie Conor Hartnett with 39 shots while Joseph Hubert made 22 saves for the black and gold.

North Allegheny’s five game winning streak vaults the Tigers to 9-4-1 on the season and into sole possession of second place in the Class AAA standings. Canon-McMillan slips to 6-5-3 on the year. The Tigers visit Peters Township in their next game on Tuesday, February 2 at 7:00 pm.