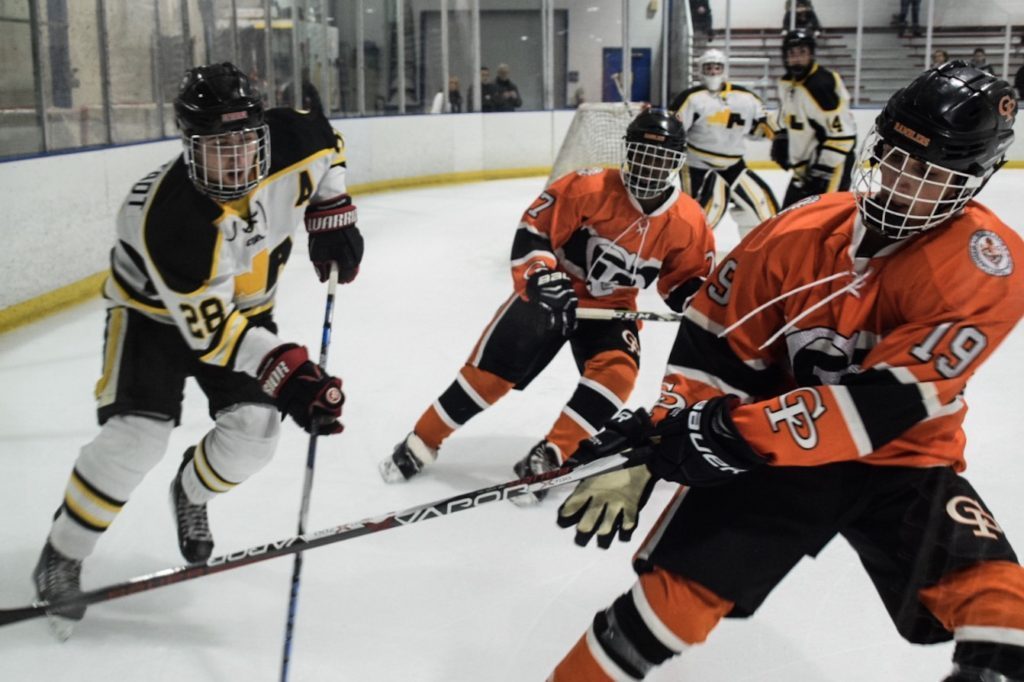 In their third meeting of the season, the third time was the charm for Cathedral Prep as the Ramblers upset the first-place North Allegheny Tigers, 4-3, on Monday night at the Baierl Ice Complex. Alexei Kowallis provided the game-winning goal for Cathedral Prep with 2:06 remaining in the game. North Allegheny’s Tyler Putnam netted two goals to give him four on the season.

After a scoreless first period, North Allegheny and Cathedral Prep traded goals most of the contest. The Ramblers tallied the first goal of the evening with a marker by Jonathan Zambroski at the 2:53 mark of the second period for a 1-0 lead. The Tigers evened the score at 1-1 at the 9:51 mark thanks to Putnam’s first goal of the night, assisted by Christopher Hanlon and Karl Fuchs. Less than a minute later, Jordan Adams put the Ramblers back on top for a 2-1 advantage. The lead was short-lived as NA’s Will Parreaguirre scored just 46 seconds later to knot things up at 2-2. Tyler Lamark and Nathaniel Heil assisted on the Parreaguirre marker.

In the third period, the seesaw trend continued when James Sturm scored two minutes into the stanza for a 3-2 Prep lead. Again, the Tigers answered back on Putnam’s second goal of the evening, assisted by Vincenzo Mazur and Dylan Watkins, to tie the game at 3-3 at the 13:14 mark. However, Kowallis delivered the game-winning goal just 1:40 later to propel the visiting Ramblers to a 4-3 victory.

Despite the loss, North Allegheny remains in first place in Class AAA with an 8-2 record. Cathedral Prep improves to 2-8 on the year. The Tigers will try to bounce back on Thursday night with a meeting against Seneca Valley at 9:10 p.m. The game will be broadcast live by the North Allegheny Sports Network.