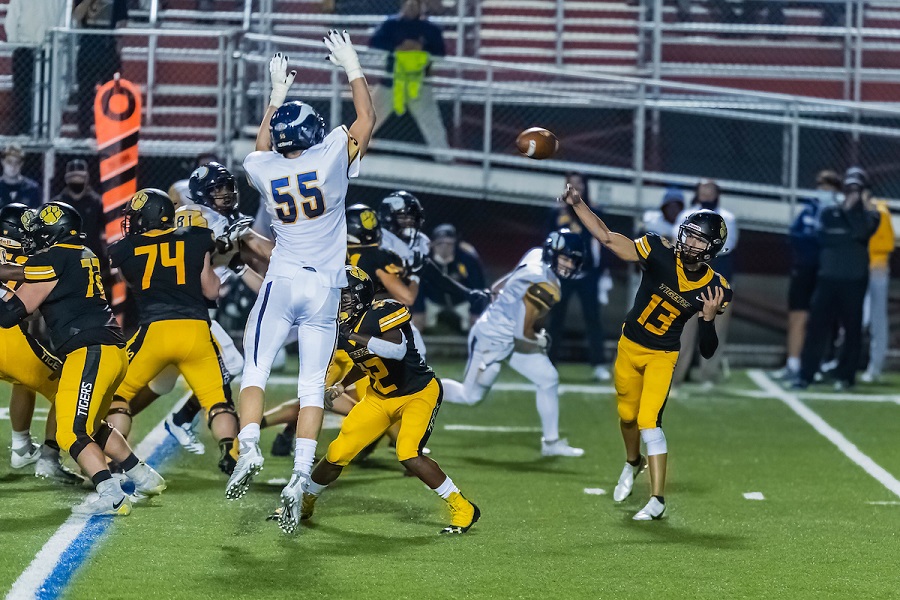 Two preeminent powers in the WPIAL’s largest classification dueled for the first time with a championship at stake and the Central Catholic Vikings outlasted the North Allegheny Tigers, 38-24, at Martorelli Stadium on Friday night in the Class 6A championship game. The Central Catholic defense forced three turnovers and senior Anderson Cynkar had two return touchdowns to propel the Vikings to their second straight WPIAL title.

Appearing in the championship game for the first time since 2012, North Allegheny got off to a quick start as quarterback Greg Phillips hit Mason Kress for a 65-yard touchdown pass on the second play from scrimmage and the Tigers jumped out to a 7-0 lead just 59 seconds into the game. Finishing with six catches for 103 yards and a touchdown, Kress was named the Wright Automotive Player of the Game.

In a first half that featured plenty of offense, Central Catholic took its initial possession of the game 63 yards but the drive stalled at the NA 7-yard line. The Vikings settled for a Matthew Shearer 24-yard field with 7:36 to play in the first quarter, trimming the Tigers lead to 7-3.

The Tigers responded with a 12-play, 75-yard drive that culminated on a 1-yard rushing touchdown by senior Nate Hoke for a 14-3 lead with 2:03 to go in the opening stanza.

On the next possession, Central Catholic put together an 11-play, 63-yard drive that was capped on a 5-yard rushing touchdown by senior tailback Eddy Tillman, cutting the NA advantage to 14-10.

With North Allegheny’s offense in high gear in the first half, the Tigers answered with another scoring drive that was spearheaded on the passing of Phillips. The senior quarterback capped the drive with a 20-yard touchdown pass to senior receiver Khalil Dinkins for a 21-10 lead with 4:38 to play in the first half. Junior receiver Dwayne Taylor also played a prominent role in the passing game with four catches for 44 yards on the night.

The turning point in the contest came on the ensuing kickoff as Cynkar returned the ball 67 yards for a touchdown and the Vikings trailed, 21-17, with 4:29 to go in the second quarter. The Cynkar kickoff return TD swung the pendulum in Central Catholic’s favor and the defense kept the momentum with the Vikings. Two plays into NA’s next possession, linebacker J.D. Younger made a diving interception at the NA 30-yard line. Eight plays later, Tillman plunged into the end zone on a 1-yard run and Central Catholic led for the first time, 24-21, with 10 seconds left before intermission.

The Central Catholic defense struck again in the second half when Cynkar intercepted a tipped pass and returned it 25 yards for a touchdown and the Vikings lead expanded to 31-21 with 5:46 remaining in the third quarter.

North Allegheny made it a one-score deficit in the opening minutes of the fourth quarter when senior Brandon Persad kicked a 24-yard field goal, bringing the score to 31-24, Vikings, with 10:06 to play.

The next drive for Central Catholic did not yield points but did eat up nearly seven minutes of the fourth quarter. The Tigers defense held strong to force a punt, giving the NA offense one last opportunity to tie the game. Defensive standouts included linebacker Sean Metcalf, who posted a team-high six tackles. Junior cornerback Kolin Dinkins also made an outstanding leaping interception early in the second half.

Pinned back at their own 9-yard line with just over three minutes in regulation following the Central Catholic punt, the Tigers needed a 91-yard touchdown drive to even the score. Instead, the Vikings intercepted their third pass of the game, this time a pick by freshman linebacker Anthony Speca that was returned to the NA 1-yard line. Moments later, Tillman scored his third touchdown of the game on a one-yard run to put the contest out of reach with 2:30 remaining, improving the Central Catholic lead to 38-24. Tillman, who was held to just 17 yards rushing by the Tigers in week three, toted the football 26 times in the championship game for 132 yards.

Central Catholic improves to 6-2 overall and advances to the PIAA quarterfinals. North Allegheny’s season comes to a close with a 6-1 record following its first loss of the campaign. Congratulations to head coach Art Walker, the entire coaching staff and all of the Tigers players for another memorable season.