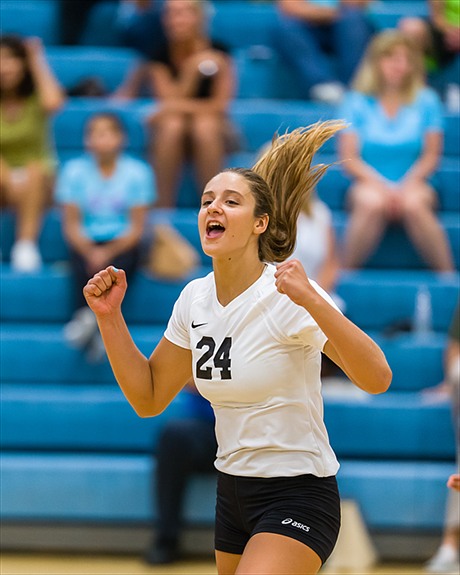 In an exciting early season match with Section 1-AAAA rival Pine-Richland, the North Allegheny girls’ volleyball team outlasted the visiting Rams, 3-2, in five sets. The Lady Tigers played from behind most of the night but roared back with continues rallies for the win. NA vanquished the Rams by set scores of 26-24, 21-25, 27-25, 23-25 and 15-10.

Pine-Richland led by as much as six points in the opening set and held a 24-21 lead with a chance to win the set. However, North Allegheny rallied to tie the score at 24-24 with the help of two aces from senior Kallan Baldis. Senior Maria Mosbacher notched her seventh kill of the set to put NA in front, 25-24, and sophomore Anna Sprys delivered the set-finishing block to give the Tigers a 26-24 come-from-behind win.

In set two, the Rams again built a six-point lead before the Tigers trimmed the deficit to one point at 21-20. This time, however, Pine-Richland managed to hold off NA for a 25-21 win. PR junior Jackie Hansen chipped in with three aces and senior outside hitter Emma Cotrill posted four kills and a block in the set.

Cottrill picked up where she left off in set four and punished North Allegheny with eight kills and a block as the Rams constructed a nine-point lead at 14-3. Pine-Richland held a 24-18 lead in the late stages of the set only to see it evaporate under the relentless pressure put on by the Tigers. Mosbacher smashed eight kills in the set and junior Kayla Dinkins added three kills, including the set-ending kill, to hand NA an exciting 27-25 win.

Pine-Richland flipped the script on the Tigers in the fourth set and rallied back in a role reversal. North Allegheny jumped out to a 10-3 lead before Cottrill and Rams stormed back to win the set, 25-23. Cottrill added two kills and two blocks to her tally and freshman Anna Jurkovec, the younger sister of Pine-Richland quarterback and Notre Dame recruit Phil Jurkovec, posted four kills and ended the set with a well-placed tip over the NA defense.

The fifth and decisive set belonged to North Allegheny who led from start to finish. Dinkins dropped in two aces, Mosbacher blasted two kills, and freshman Abby Miller delivered three kills in the final set. The last point of the night came courtesy of an Emily Keiser kill off the left-side block of Pine-Richland for a 15-10 win and a 3-2 final over the Rams.  With an unofficial 20 kills on the evening, Maria Mosbacher was named the Wright Automotive Player of the Match by the North Allegheny Sports Network.

The win puts North Allegheny at 5-0 overall and 2-0 in Section 1-AAAA. Pine-Richland falls to 0-2 in the section. The Lady Tigers will visit the south hills on Saturday for the Upper St. Clair Invitational at 8:30 a.m.