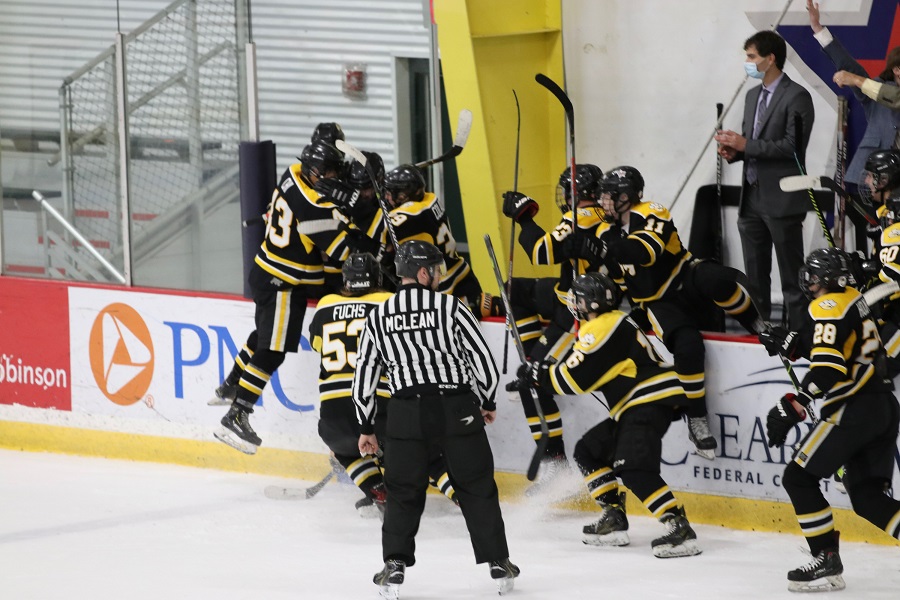 Connor Chi’s goal just 30 seconds into overtime propelled North Allegheny to a 4-3 triumph over the Peters Township Indians in the PIHL Class AAA semifinals on Monday night at the RMU Island Sports Center. The goal, Chi’s second of the night, punched North Allegheny’s ticket to the Penguins Cup finals next week to face the seventh-seeded Mt. Lebanon Blue Devils.

Monday night’s game marked the fifth time in the last six years the Tigers and Indians met in the PIHL playoffs. Like many of the postseason games in years past, this one was another instant classic between two storied programs.

In a fast-paced first period, both teams lit the lamp twice. Peters Township sophomore Austin Malley opened the scoring with a power play goal at the 3:38 mark of the period. On a night where the NA special teams played a pivotal role, the Tigers answered back with a power play goal of their own when Trey Gallo sent a shot on net that was saved by Tanner Ringwald, but junior Luke Washabaugh jumped on the rebound for a goal at the 5:02 mark to tie the game at 1-1. The tie was short-lived as just a minute later, the Indians regained the lead on a goal by Koby Ringwald to bring the score to 2-1, Peters Township. At the 13:12 mark, a great defensive play by Chi led to a scoring chance on the other end and the junior’s sniper shot beat Tanner Ringwald for a 2-2 tie.

The second period became more of a defensive struggle with the North Allegheny penalty kill unit staving off three Peters Township power play chances. Early in the third period, the Tigers got their second power play chance of the night and cashed in again on a marker by Austin Peterson at the 1:43 mark for a 3-2 lead. The Tigers were 2-for-3 on the night with the man-advantage and stopped the Indians on 3-of-4 power play chances.

NA’s one-goal lead remained intact until the waning seconds of the third period, when Malley netted his second goal of the evening with just 4.3 seconds to play and the game was deadlocked again, 3-3.

Playing in their seventh overtime game of the season, North Allegheny improved to 5-2 in OT contests thanks to Chi’s goal 30 seconds into the extra session for a 4-3 victory.

Senior goalie Josh Bailey made 21 saves to earn the victory, while Tanner Ringwald stopped 19 pucks in a losing effort.

North Allegheny, the reigning Class AAA Penguins Cup champions, advances to the PIHL title tilt to face Mt. Lebanon. The Blue Devils earned their second straight upset on Monday night with a 3-2 win over third-seeded Pine-Richland. The Class AAA championship game will be played on Monday, April 19 at 6:30 p.m. at the RMU Island Sports Center.