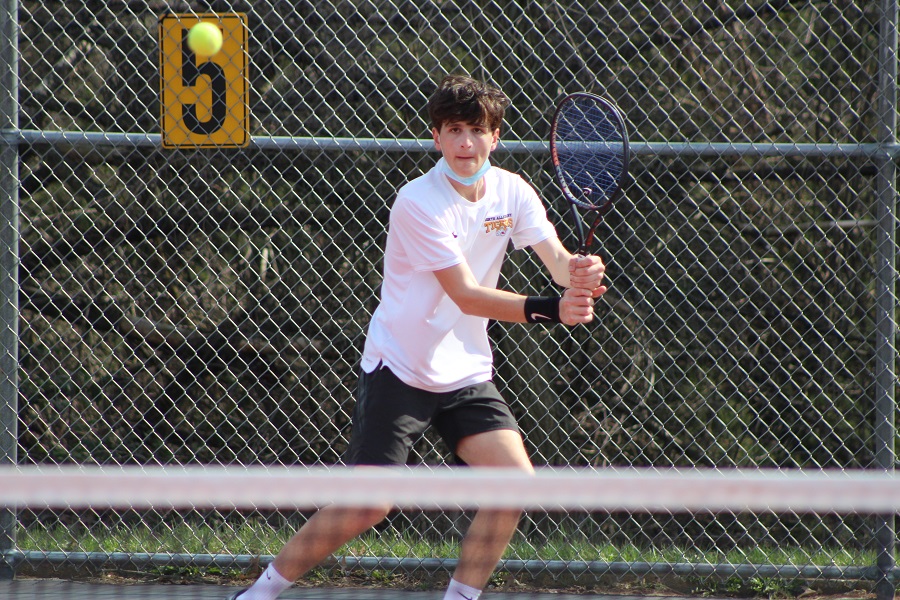 Day one of the WPIAL AAA Doubles Tennis Tournament was held at Shady Side Academy Tuesday afternoon, and it proved to be a spectacular experience for the Tigers.  Sophomores Sri Bellamkonda and Raj Ginde comprised the NA #2 team and drew the overall 16th seed.  They played a solid set but lost in the first round to Franklin Regional’s one-seeded Anup Nadesan and Advait Kulkami, 10-7

The #1 NA team of senior Chase Davidson and junior Shomik Telang drew the overall third seed and took on Central Catholic’s 14th seeded entry in the first round, beating Kyle Broadhurst and Anthony Arshoun 10-4.  Next up was Upper St. Clair’s 11th seeded Harrison Chui and Dev Patel in the quarterfinals.  The Tigers went on to tame the high energy Panthers 10-7.  The quarterfinal victory sent Davidson and Telang to the semi-finals where they battled the second seeded Indians of Peters Township, Elian Ascensio and David Lusk.   The first set saw both teams struggle to hold serve, as each of the first four games were service breaks leading to a 2-2 tally.  Several holds were then interrupted by more breaks.  The Tigers held on to take the set at 7-5.  The second set saw the Tigers jump out to a 5-1 lead, but the Indians roared back with four straight wins to even the set at 5.  One service hold and one service break later, the Tigers won the second set by a 7-5 margin again and qualified for Wednesday’s championship round.

With the top two double units guaranteed a berth, NA’s Davidson and Telang have already punched their tickets to the PIAA State Championships in Hershey during Memorial Day weekend.  In the meantime, the championship match between NA and the winner of the Mt. Lebanon/Franklin Regional semi-final will take place on the North Allegheny Courts Wednesday afternoon at 2 PM.  Scores and updates will be provided on the North Allegheny Sports Network.