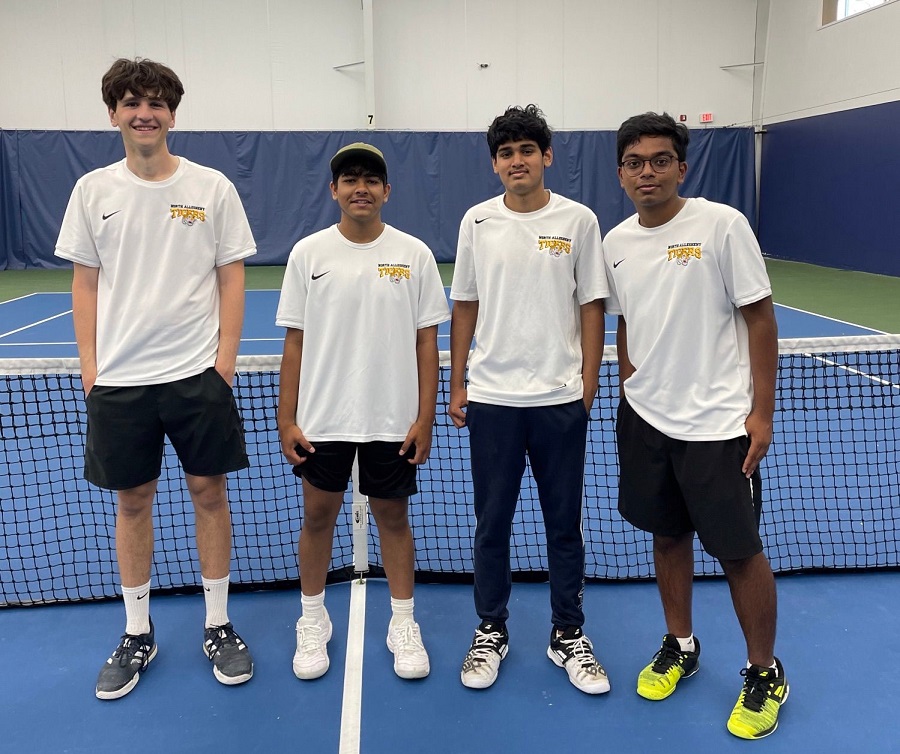 Moving indoors to the Oxford Athletic Club due to a snowy April Wednesday, The Tigers competed with two teams participating in the “Final Four” of the AAA-2 Section Doubles Tournament.  The #2 NA Team took on North Hills’ #1 team in the consolation match-up.  Kudos to sophomores Sri Bellamkonda and Raj Ginde who fell to the Indians in straight sets but competed strongly in the two day tournament.

Finding the indoor conditions to their liking, the NA #1 team of Chase Davidson and junior Shomik Telang won the championship by defeating Moon’s #1 team and the overall second seed.  Both Tigers maintained consistent serves throughout the match and it set the tone for them to use a wide variety of shots at key moments.   Davidson and Telang, the overall first seed in the tourney, were able to defeat the talented tandem of Anthony Lounder and Rohan Maheshwari in straight sets to claim the top spot.

Both NA teams (and all of Wednesday’s participants) move on to the WPIAL Doubles Tournament to be held starting Tuesday, April 27 at Shady Side Academy.  The competition draw will be established by the WPIAL Tennis Committee by Friday afternoon.  In the meantime, the Tigers’ return to team action on Friday with a home exhibition match against the Pittsburgh Central Catholic Vikings.  The starting time on the NASH courts is 3:30 PM.