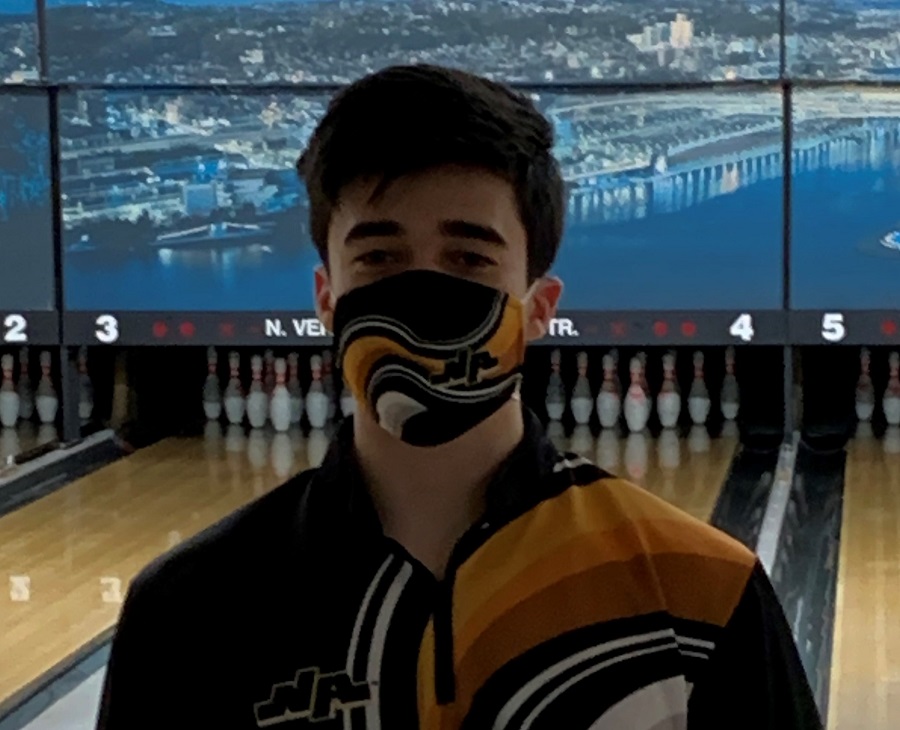 Scheidler had earned the #5 seed and was pitted against the #8 seed from Serra Catholic, Cam Munsie.  The higher seed is given the option of starting the game on the left lane or conceding the start to the other player.  Like the Professional Bowlers Tour, the starting bowler bowls their first frame and sets the precedent.  The second bowler then bowls the first and second frames.  Both players continue this format in succession until the final frame.  The starting bowler, then also takes on the role of the final bowler as bowler #2 finishes their game before bowler #1.

Scheidler chose to bowl first in his first match.  With a total of 6 strikes and a couple of spares, Dylan was able to eliminate Munsie 211-177 and move on to the quarterfinal round.  In the other opening round match Mark Livingston from Freeport defeated Greensburg Salem’s Luke Shevchik 246-212.

In the quarterfinal round, #4 seed Ian Baker from East Allegheny decided to take the first bowler position against Scheidler.  Both Baker and Scheidler are two-handed bowlers.  Scheidler threw a 5-bagger to start the game.  He followed it up with a spare, double, spare, and finished with a turkey in the 10th.  Scheidler eliminated Baker 258-225.  Livingston also took out the higher seed in his quarterfinal match, defeating the #3 seed from Hempfield, Dominick Vallano, 237-216.

For the semifinals, Scheidler took on the number one qualifier, Jordan Huffman from Cranberry High School in Venango County.  Huffman opened the match up with a turkey but threw a split in the 5th frame.  He opened again in the 8th frame.  Scheidler capitalized on his opponent’s mistake and filled the back five with a 6-pack, besting Huffman 247-211.  Likewise, Livingston continued his winning ways knocking off the #2 seed Greater Latrobe’s James Gatto 268-183.

After 5 hours of bowling for the day, the field of 76 was whittled down to the final two.  The Championship match came down to the WPIBL #1 and #2 averages.  Livingston finished up the regular season with the highest average at 226.20.  Scheidler was just on his heels at 223.03.  Livingston saved his best game of the competition for last and was nearly flawless rolling a 299.  Livingston finished his game before Scheidler, and even though he knew he had lost the match and the title, Scheidler threw a double in the 10th frame and finished with a respectable 193 earning the runner-up designation and trophy.

Scheidler and the other top 16 high school bowlers in Pennsylvania will be competing on Friday, March 19th for the title of State Singles Champion.

The stepladder matches were recorded with live commentary and can be viewed on the Western PA High School Bowling Facebook page.