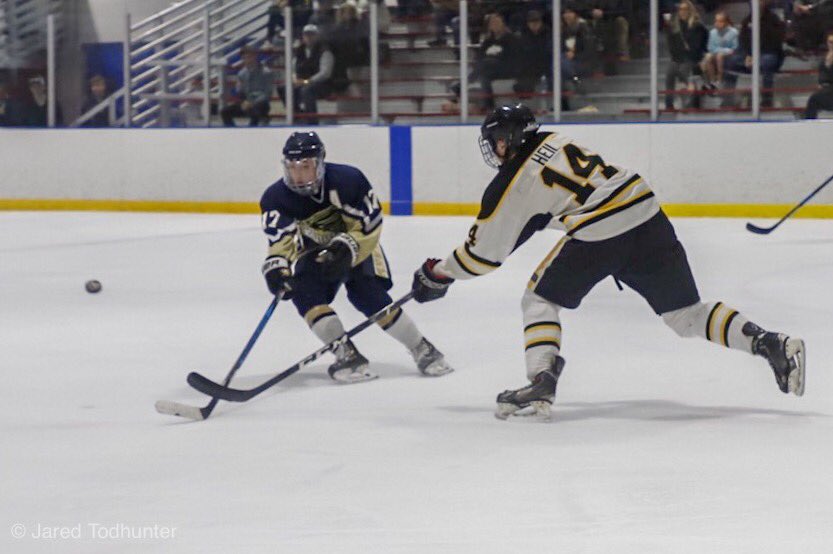 A hat trick by senior forward Dylan Watkins propelled North Allegheny to its fourth straight win with a 3-1 triumph over the Butler Golden Tornado on Monday night at the Baierl Ice Complex in Warrendale.

Watkins’ first goal of the night came on a power play in the first period, assisted by Tyler Lamark, for a 1-0 lead. North Allegheny’s one-goal advantage remained all the way into the third period before Butler knotted the score at 1-1 on a power play goal by Jerome Oliver at the 7:18 mark.

That set the stage for Watkins’ heroics as he scored the game-winning goal with 2:11 left in regulation for a 2-1 NA lead. Watkins put the game on ice with another goal with just 55 seconds remaining to give the Tigers a 3-1 victory.

Senior goalie Richard Karapandi earned the win by stopping 21 of the 22 shots he faced. Butler netminder Connor Stroebel made 29 saves in a losing effort.

With the win, North Allegheny stretches out its first-place lead in the PIHL Class AAA standings over second-place Peters Township. The Tigers sit at 9-1 on the season with 18 points in the standings, six points better than Peters. Butler falls to 2-5 following the loss. North Allegheny will host Cathedral Prep on Monday at 7:00 p.m.