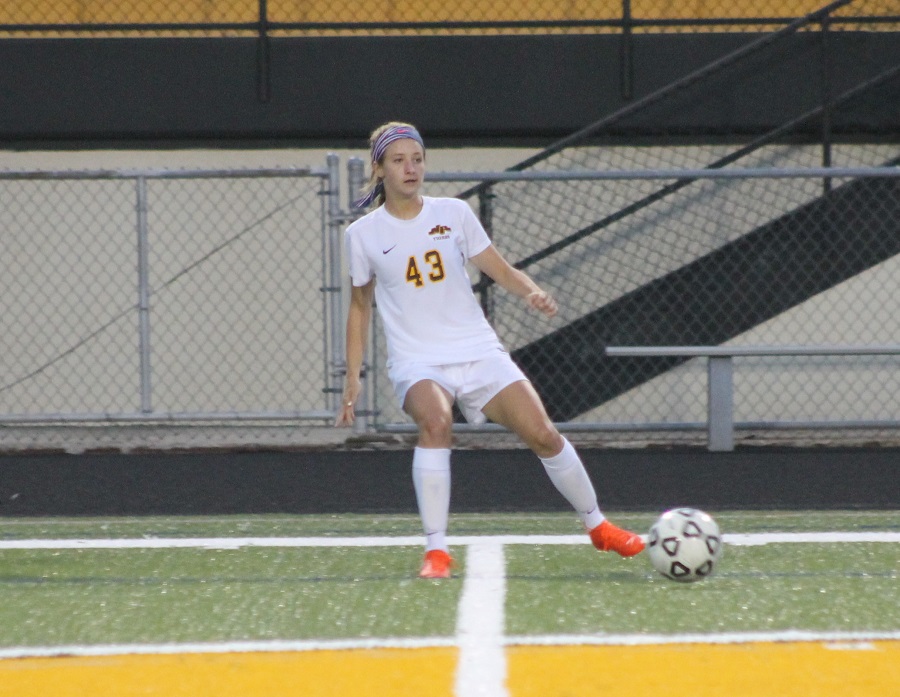 Freshman Emma Bundy’s goal in double overtime lifted North Allegheny to an exciting 3-2 victory at Butler in Section 1-AAAA action on Wednesday night. The outcome continues NA’s dominance over Butler in girls’ soccer as the Lady Tigers have won 15 of their 16 games against the Golden Tornado.

In a tremendously played game by both teams, North Allegheny caught the first break of the night when the Tigers were awarded a free kick just beyond the goalie box. Junior Hayley Stultz took the free kick and released a rocket that beat Butler goalie Anna Voelker for a 1-0 NA lead with 25:23 remaining in the first half.

The Lady Tigers held possession much of the half but Butler tied the contest on a corner kick with 13:55 to play in the first half. Golden Tornado senior Riley Seibert administered a corner kick that was headed into the NA net by Kelly Kriley to even the score at 1-1. North Allegheny answered back with 5:10 to play before intermission on an Alex Adams goal that was assisted by Morgan Anderson for a 2-1 lead.

Coming out of halftime, Butler evened the score less than three minutes into the second half courtesy of a goal by Elizabeth Sims that just trickled off the hands of NA goalie Olivia Ruppersberger and into the net to bring the score to 2-2. Despite North Allegheny’s dominance of the field in the remainder of the half, the score stayed tied and the game proceeded to overtime.

In the first overtime, Bundy had two good chances to give North Allegheny the win but her attempts narrowly missed high over the crossbar. In the second overtime, the third time was the charm for Bundy. The freshman’s line drive shot pushed past the reaching arms of Voelker to give the Lady Tigers a thrilling overtime win. For her efforts, Bundy was named the Wright Automotive Player of the Game by the North Allegheny Sports Network.

While the score was close, the shots on goal statistic was not as North Allegheny outshot Butler, 17-5. Corner kicks were even at four apiece.