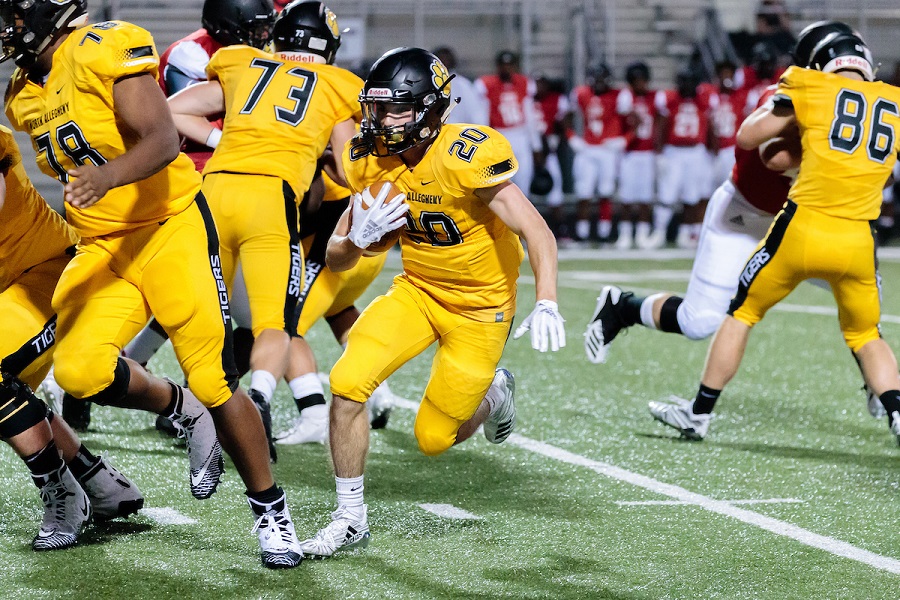 The scoring came early and often as North Allegheny score 42 of their 49 points in the first half leading to a 49-27 victory over the Hempfield Spartans on Friday night. With the win, North Allegheny has solidified a top two seed in Class 6A, securing them a first round bye and a home game in the WPIAL semifinals.

North Allegheny got the perfect start when Percise Colon took the opening kickoff 85 yards to the house. The conversion failed but 13 seconds into game North Allegheny had a 6-0 lead. Hempfield began to drive on their first possession, but while in Tiger territory there was a fumbled handoff and Cade Hoke pounced on the loose football giving the Tigers the ball back. Ben Petschke then found Khalil Dinkins for the second straight week on a 48-yard pitch and catch. Petschke and Dinkins then connected on the 2-point conversion and North Allegheny’s lead extended to 14-0. With 3:43 left in the first quarter, the Tiger defense once again made a big play when Hempfield was in their territory. Luke Collela got his first interception of the year, stalling another Spartan drive. Ben Maenza then finished North Allegheny’s drive with a 2-yard touchdown run, his 14th of the season. Issac West converted the extra point and after a quarter of play North Allegheny had a 21-0 lead.

The beginning of the second quarter was much of the same. After a beautiful punt by Hempfield’s Blake Ramaley put North Allegheny on their own 4-yard line, Maenza took the ball 96 yards on the first play of the drive for his second touchdown of the night making the score 28-0. After another stop by the Tiger defense it was the air attack that dominated the next drive, finished off with a 53-yard connection from Petschke to Colella for six and the lead extended to 35-0. Colon got back into the endzone with under two minutes left in the half from 14 yards out. Drew Jefferies came on to kick the extra point and made it 42-0. Hempfield picked up two late touchdowns before the half to cut the North Allegheny led 42-13.

After a sluggish finish to the first half, North Allegheny’s defense set the tone for the third quarter when Nathan Kerber forced a fumble on Hempfield’s first drive which was recovered by North Allegheny. The offense once again turned a turnover into points when Colon scored from 23 yards out making the score 49-13. Hempfield got two more scores in the fourth quarter but it was a day dominated by the Tigers, ultimately winning the game 49-27.

Colon was the Wright Automotive Player of the Game with 140 total yards, three total touchdowns and a blocked extra point.

Ethan Augustine led the defense with nine tackles and a sack. Justus Gildon had five tackles and Corey Melzer had four.

The Tigers improve to 8-0 overall and 7-0 in the conference. They will be back in action next Friday for non-conference action on the road against West Allegheny (6-1). Kickoff is at 7 p.m. and as always can be heard right here on the North Allegheny Sports Network.