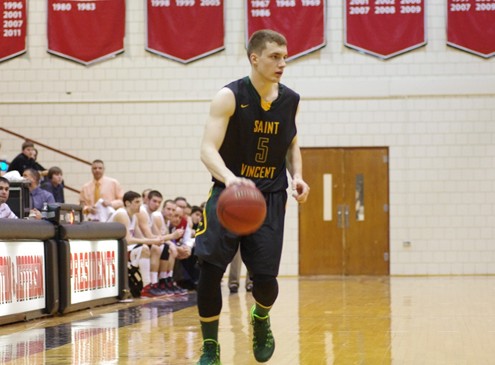 GREENVILLE, Pa. (Feb. 3) – After a week in which he established a new career high in both contests, Saint Vincent sophomore guard J.C. Howard has been named the Presidents’ Athletic Conference Men’s Basketball Player of the Week.

A Pittsburgh native and North Allegheny graduate, Howard averaged 23.5 points per game as the Bearcats ran their winning streak to 13 games and 22-straight against the PAC (19 in the regular season). He was impressive shooting the basketball, knocking down 75 percent (12-of-16) of his three-point attempts and 75 percent (15-of-20) of his total field goal attempts.

His three-pointer with 1:22 left in Wednesday’s 80-77 come-from-behind victory at Washington & Jefferson began a 13-3 run to help SVC rebound from a seven-point deficit. With 21 seconds to go, he gave the Bearcats their first lead since halftime with another triple, his fifth of the game. The 6-2 sophomore stepped up his defense, recording a steal on the ensuing W&J possession and knocking down a pair of free throws to give SVC a three-point lead. He finished the contest with a then-career high 23 points, three rebounds, two steals, a block and an assist.

In Saturday’s 101-54 rout of Westminster, Howard once again established a new career high, going for 24 points in just 20 minutes. In the contest, Howard knocked down seven-of-nine shots from downtown, including five-of-six in the first half, while adding three assists, three steals and two rebounds.  (release courtesy of St. Vincent Athletics)