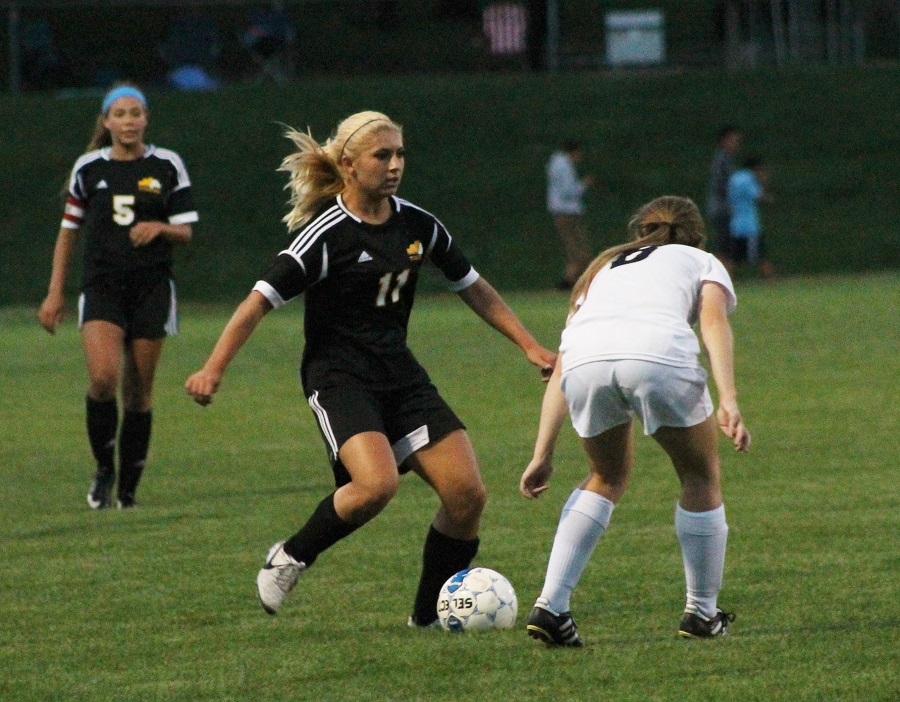 Junior Gabby Smychynsky scored the game winning goal in the 71st minute to lift the North Allegheny Girls Soccer team to a 3-2 win at Butler on Monday night in a Section 2-AAA contest. The game was a see-saw affair that saw the Golden Tornado strike first with a marker by Haley Michael in the 4th minute of the game to give Butler a 1-0 lead.

Butler controlled the pace for a large portion of the first half until the 27th minute when the Tigers were able to break through to tie the score. Senior Monica Pike found Savana Yurick with a crossing pass and Yurick buried the shot to knot the score at 1-1. Yurick assisted on North Allegheny’s next goal at the 38th minute when the senior forward beat a defender and played the ball forward to Amanda Miller who shot the ball past the Butler keeper for a 2-1 lead.

Butler drew even in the second half when Brittnie Spithaler uncorked a rocket from 25 yards out in the 60th minute to tie the game at 2-2. Following the Golden Tornado goal, the Lady Tigers were determined to retake the lead and eventually tallied the clutch game winner by Smychynsky in the 71st minute on an assist by Yurick to give NA the lead for good, 3-2. In net, NA goal keeper Emily Lyons collected six saves on eight shots by Butler to earn the victory.

North Allegheny leaps to 3-1 overall and 2-1 in section play with the win. Butler falls to 1-3 and 1-1 in the section. The Lady Tigers return to action on Thursday night with a home contest against Pine-Richland at 7:00 pm. The game will be broadcast live via the internet on the North Allegheny Sports Network.