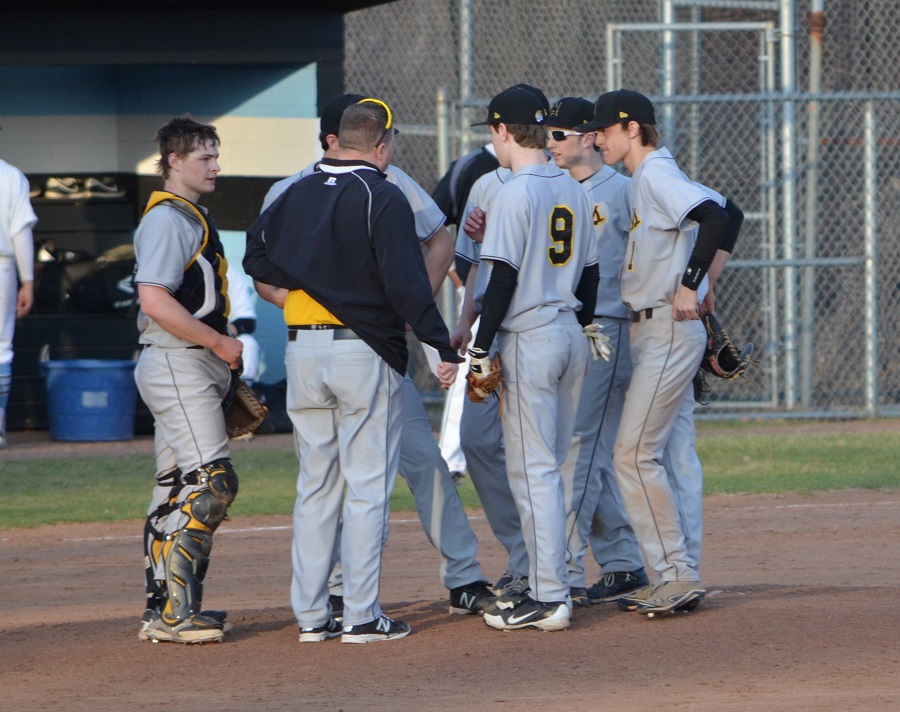 Battling for their playoff lives, the North Hills Indians used a five-run second inning to upset the North Allegheny Tigers, 8-6, at Herb Field on the final Friday of the regular season.  The North Hills win snapped a seven game losing streak to the Tigers and kept their playoff hopes intact as they hope to track down the Seneca Valley Raiders for third and final playoff spot in Section 1-AAAA.

Having already clinched a playoff berth, the Tigers have their sights set on a section title and jumped out to a 2-0 lead in the first inning.  Mitch Machi drove in Matt Muslin with a two-out single and Dan Trettel also came in to score when Indians left fielder Chad Myer misplayed the ball in the outfield. NA added on in the second inning on a two-out base hit single by Josh Plichta to make it 3-0, Tigers. Going 2 for 2 with a pair of RBI and walk, Plichta was named the Wright Automotive Player of the Game.

Atoning for his error in the first inning, Myer drilled a first pitch fastball in the bottom of the second over the centerfield fence to spark a five-run frame. Adept at pirating bases, the Indians utilized their team speed to continue the big inning.  With runners at first and third and one out, North Hills executed a double steal that allowed Andrew Bly to trot home and the score was cut to 3-2, Tigers. Later in the inning, the Indians tied the game on an RBI ground out by Tyler Volz and took a 4-3 lead on an RBI single by Josh Kaminski.  A batter later, Kaminski rounded the bases on an NA throwing error to put North Hills ahead, 5-3.

The Tigers cut the score to 5-4 in the fifth inning on a majestic homerun to left field by Ryan Hamm, his first long ball of the season, but the Indians regained control in the bottom of the fifth with a three-run inning.  Tyler Volz capped the frame with a two-run double with two outs.

North Allegheny refused to go away quietly in the top of the sixth, chipping away with a sacrifice fly RBI by Plichta and another RBI single by Machi, cutting the North Hills advantage to 8-6.  With two on and two out, Hamm put a scare into the Indians with a deep fly ball to right-centerfield, but Bly made a reaching catch into the gap to keep the Tigers from coming any closer.

Kaminski, North Hills’ closer, finished off the 8-6 victory in the seventh inning by inducing a 4-6-3 double play. Indians starter Mike Serpa earned the win, grinding through six innings despite serving up 12 hits to the Tigers.  Machi got the start for NA and was chased in the second inning as he was saddled with his first loss of the year.

North Allegheny slips to 11-6 overall and 7-2 in Section 1-AAAA.  North Hills improves to 7-7 overall and 4-5 in section play. The Tigers visit New Castle on Saturday afternoon at 3:30 pm.  The Indians, hoping to reach playoffs for the first time since 2007, will take on Butler on Monday.