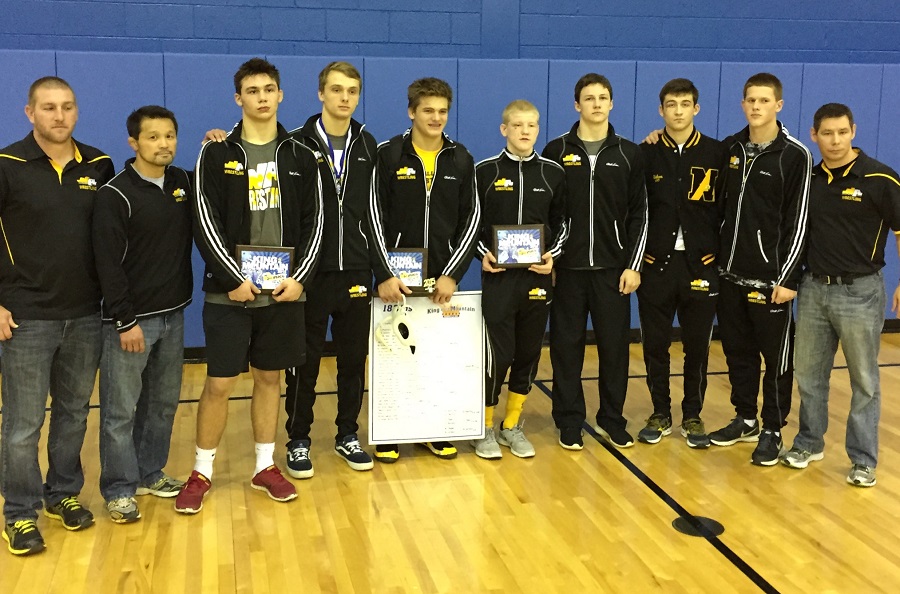 Four Tigers medaled at the King of the Mountain wrestling tournament at Central Mountain High School this weekend. Only seven wrestlers competed for North Allegheny as the Tigers finished with a team score of 104 and took eighth place at the tournament. However, there were several top-shelf performances by the black and gold, highlighted by a first-place showing from junior Jake Woodley at 182 pounds.

Woodley defeated three top-ten wrestlers en route to 182-pound gold. With a win by fall and tech fall to start the tournament, Woodley cruised to the quarterfinals where he defeated fifth-ranked Gregg Harvey of Boyerstown by a 3-1 decision. In the semifinals, Woodley earned a 3-1 decision over eighth-ranked Adam Soldridge of Bethlehem Catholic. In the championship bout, Woodley beat top-ranked Jake Shaffer of Greater Latrobe by a 7-3 decision.

Luke Landefeld (120) and Francis Duggan (195) collected silver medals in their respective weight classes. Landefeld earned an exciting 2-1 overtime decision over Luke Carty of Bethlehem Catholic in the semifinals before eventually falling to fourth-ranked Austin Desanto of Exeter Township by a narrow 4-3 decision. For Duggan, he delivered a win by fall over Jody Crouse of Bethlehem Catholic in the quarterfinals and beat fifth-ranked Trey Hartsock of Mifflin County in the semifinals, 3-1, in overtime. It took a 2-1 overtime decision by Justin Allman of Parkersburg South to edge Duggan in the championship bout at 195. Allman is a two-time West Virginia state champion.

At 152 pounds, Sean Kalmeyer came away with a seventh place finish. The NA senior went 5-2 at the tournament with a tech fall, including wins over 10th-ranked Hunter Vogels of Boyerstown and 13th-ranked Seth Young of Jersey Shore.

Other Tigers who saw action were Jake Hinkson (138), Jacob Smalley (160) and Jacob Fritsch (170). Hinkson went 2-2 at the tournament with a fall and tech fall. Smalley earned his first career varsity wins with a pair of falls and a 2-2 performance. Fritsch was 1-2 in his three bouts. For a look at all of the brackets from the King of the Mountain Tournament, click here.

North Allegheny will return to action on Wednesday night with a section matchup against the Knoch Knights. The match will be broadcast live via the internet on the North Allegheny Sports Network.