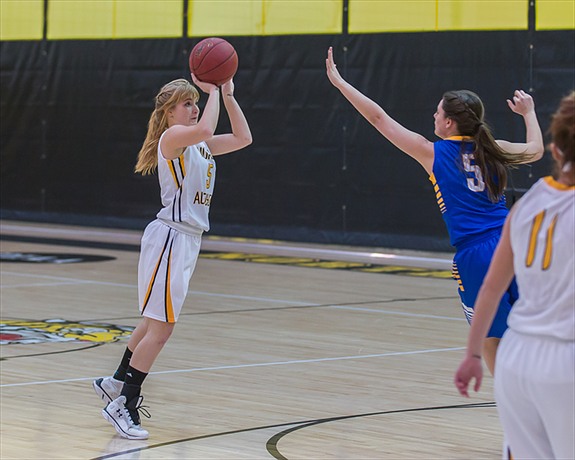 The Lady Tigers won their 13th in a row and locked up a share of the Section 3-AAAA crown with a 55-37 triumph over the Butler Golden Tornado on Friday night. North Allegheny hounded Butler into 28 turnovers with a feisty defense and controlled the pace of the game throughout the night.

Offensively, junior Devvin LaBarge led all scorers with 21 points and was 4 of 8 from beyond the arc.  Scoring 13 of her points in the second half, LaBarge helped NA pull away from the Golden Tornado and earned Wright Automotive Player of the Game honors. Also scoring in double figures for the Tigers was junior Meg Morningstar who tallied 10 points and three rebounds.

Butler’s Julia Baxter was held in check in the first half thanks to the defensive efforts of NA sophomore Taylor Lake.  Lake was glued to Baxter for most of the night and limited the talented junior post player to five first half points.  Baxter ultimately tallied a team-high 18 points and 10 rebounds, but the majority of her damage came with the game well out of reach.

North Allegheny improves to 14-1 overall and 9-0 in Section 3.  Butler drops to 8-6 overall and 3-5 in section action.  The Lady Tigers return to the hardwood on Monday night with a non-section game against the Plum Mustangs.  Tip-off is slated for 7:30 pm.