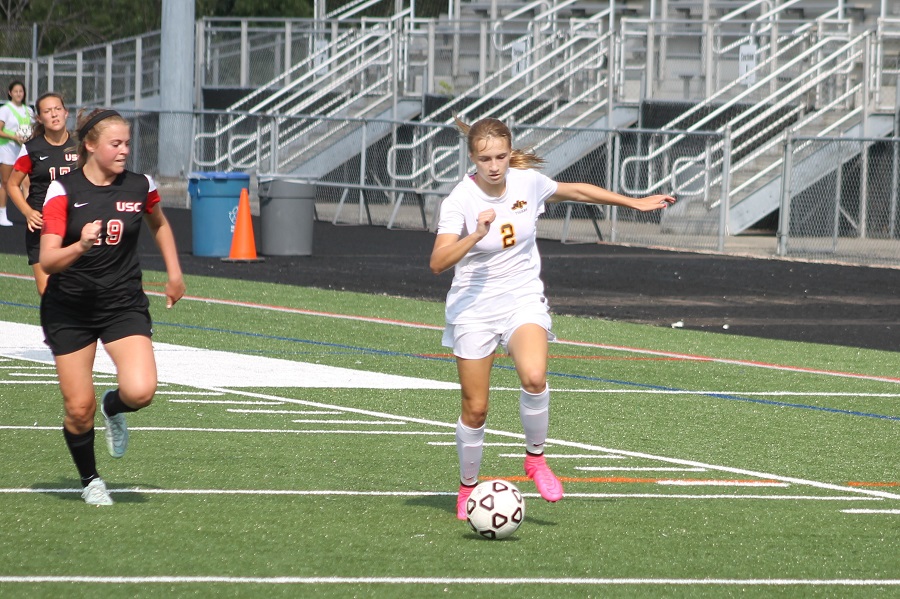 The Lady Tigers hosted Upper St. Clair at NASH today in a tandem event with the boy’s soccer team for the annual NA Soccer Fest, a day full of soccer at the stadium, and fell narrowly short to the Panthers, 3-2.  USC started out strong in the first 10 minutes tallying 3 shots and 2 corners but the Lady Tigers were up to the task and held the score at nil.  NA had a great scoring opportunity of their own in the 15th minute but Isabella Pietropola’s shot glanced off of the USC keeper.

USC would net the first goal of the contest in the 20th minute when Kat Miller lofted a long shot that found the back of the net to give the Panthers the 1-0 lead. NA would put on great pressure throughout the rest of the first half with several scoring opportunities.  In the 33rd minute Lady Tiger sophomore Alex Adams took a pass from junior Morgan Anderson but her shot would veer off of the post. Then with 4 seconds remaining in the first half Adams would strike again but just wide and USC took a 1-0 into the half.

The Lady Tigers came out of the half with momentum and a lot of energy.  In the 45th minute freshman Emma Bundy received a ball from Pietropola and slotted it past the USC keeper to tie the game at 1-1.  NA would keep the pressure on continuing through the second half just missing on some great scoring opportunities.  Then the Lady Tigers finally capitalized on the pressure in the 66th minute when senior Brooke Anderson was awarded a free kick, her shot was saved but junior Morgan Anderson was there for the rebound to give the Lady Tigers the 2-1 lead.

In the 78th minute USC would capitalize on a shot just over the NA keeper hands to tie the game at 2-2.  Then just 20 seconds later USC would strike again off of a through ball that was slotted just past the NA keeper giving them a 3-2 lead that they would not relinquish.  The Lady Tigers fall to 1-1 against non-section opponents and will kick off section play on Monday when they host Seneca Valley at 7:30pm.  That game will be broadcast on the NA Sports Network.