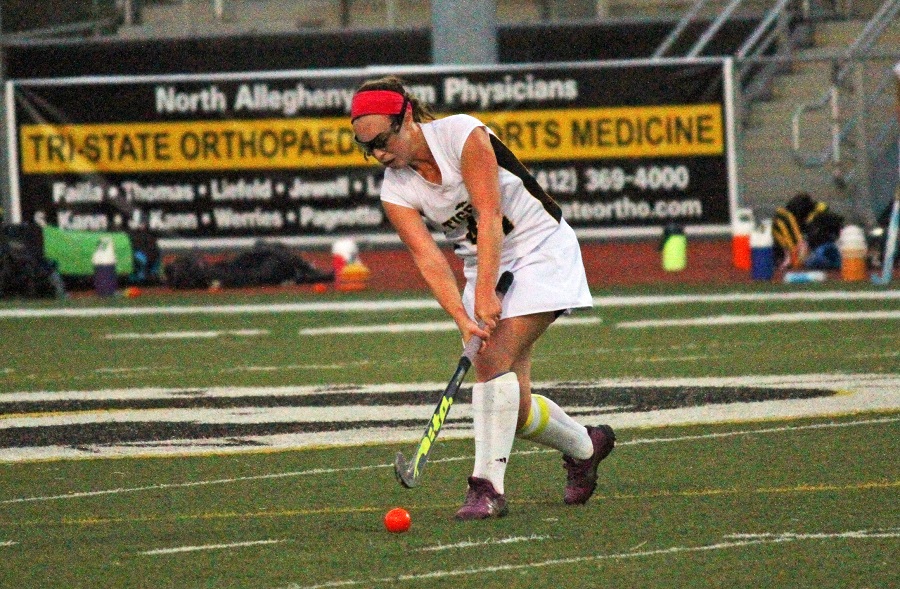 North Allegheny extended its section unbeaten streak to 41 consecutive games with a 5-0 victory over the Hempfield Spartans on Thursday night. Not since over four years ago have the Lady Tigers lost to a Section 1-AAA foe and NA extended that string with a one-sided win over the Spartans.

In contrast, Hempfield hasn’t won a section game since 2013 but hung tough with the reigning two-time WPIAL champions in the early going. The defensive efforts of players like Madi Stoner, Jordan Bernard and Autumn Beasley managed to hold NA at bay for the game’s first 10 minutes. However, at 10:04 of the first half, the Tigers earned their first penalty corner of the night and cashed in with a goal by junior Erin Coran that was assisted by Jessie Serody.

While the Hempfield defense did its best to hold off NA, the Tigers persistent pressure led to another goal by senior Kate Graham with 3:37 to go in the first half. Junior Brooke Cameron assisted on the Graham goal, and she scored one of her own with just 30 seconds to play before intermission to send the Tigers into halftime with a 3-0 lead.

North Allegheny put the game away in the second half with goals by sophomore Gracie Limauro and senior Anna Zahren to bring the final score to 5-0, Tigers. The final goal by Zahren was the prettiest of the night, set up on tic-tac-toe passing by NA and assisted by Limauro.

The Spartans rarely marched into Tigers territory and tallied only two shots on net in the second half, attempts that were swiftly kicked aside by goalie Rena Israel. A large reason for the one-sided nature of the game was the play of the NA midfield, and in particular, Serody. The senior captain covered the field from sideline to sideline stealing away Hempfield’s clearing efforts. Also assisting on two goals, Jessie Serody was named the Wright Automotive Player of the Game by the North Allegheny Sports Network.

The win for North Allegheny boosts the team’s overall record to 2-2 and raises the section mark to 2-0. The Lady Tigers will host Hathaway Brown at 8:00 am and Shaker Heights at 12:30 pm on Saturday as part of the Field Hockey Day extravaganza at Newman Stadium.