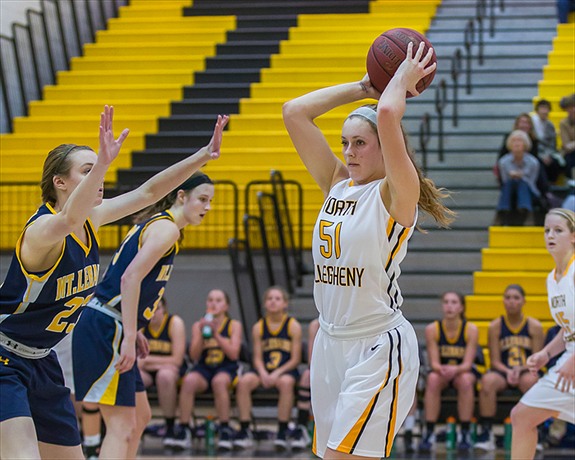 North Allegheny’s domination of the offensive and defensive glass helped the Lady Tigers outmuscle the Oakland Catholic Eagles on Monday night, 45-35, in a Section 3-AAAA game.  NA outrebounded the Eagles 44-30 and senior Danielle Wall was a terror in the paint, securing 17 rebounds.  Wall’s efforts on the boards helped the Lady Tigers rally from a 13-5 first quarter deficit for a 20-16 halftime lead.

North Allegheny shot only 26 percent from the field compared to 33 percent for Oakland Catholic, but the Tigers ability to score on second chance opportunities proved to be the difference in the game en route to a 10 point victory.  Along with her 17 rebounds, Wall scored seven points for the Lady Tigers.  Sophomore Abby Gonzales paced the NA offense with 6 of 15 shooting and 17 points, to go along with six assists and four steals.  Senior guard Taylor Brennan also touched double figures with 10 points.

The road win gives North Allegheny 12 victories in a row and improves the Lady Tigers record to 13-1 overall and 8-0 in Section 3.  Oakland Catholic drops to 3-12 overall and 2-6 in section play. North Allegheny returns to action on Friday night against the Butler Golden Tornado at 6:30 pm.  The game will be broadcast live via the internet on the North Allegheny Sports Network.  Randy Gore and Rick Meister will have the call.