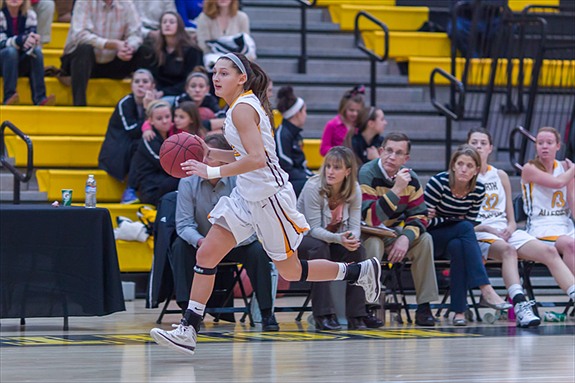 The Lady Tigers pounced on Latrobe early and invoked the mercy rule by the third quarter as top-seeded North Allegheny rolled to a 77-34 victory in round one of the WPIAL Class AAAA Playoffs.  Latrobe played without its top scoring threat, sophomore Madison Kollar due to a leg injury suffered in Monday’s regular season finale, and the Wildcats could do little to thwart the impending avalanche of points from the Tigers.

NA opened up a 19-2 lead in the first quarter, and despite a 9-2 run by Latrobe that cut the score to 21-11, the Lady Tigers coasted to a landslide victory. North Allegheny was paced by junior guard Devvin LaBarge who poured in a game-high 25 points and was 4 of 6 from beyond the arc.  Sophomore guard Abby Gonzales pumped in 19 points and sophomore forward Taylor Lake chipped in with 10 points and six rebounds.  Covering nearly every floorboard at North Hills High School, Gonzales’ defensive pressure produced five steals and helped NA create 19 Latrobe turnovers.  Adding five assists, Gonzales was named the Wright Automotive Player of the Game by the North Allegheny Sports Network.

With Kollar out, Latrobe was led by senior Emma Kate Womack’s team-high 12 points and six rebounds. Womack was 4 of 11 from the field and 4 of 5 from the free-throw line.

Latrobe, who reached the playoffs for the second consecutive season, sees its season end with a record of 12-10.  With their 20th straight win, the Lady Tigers improve to 21-1 and will face Section 3-AAAA rival Shaler in the quarterfinals on Friday, February 21, at a site and time to be determined.  North Allegheny defeated Shaler twice in the regular season and once in overtime.