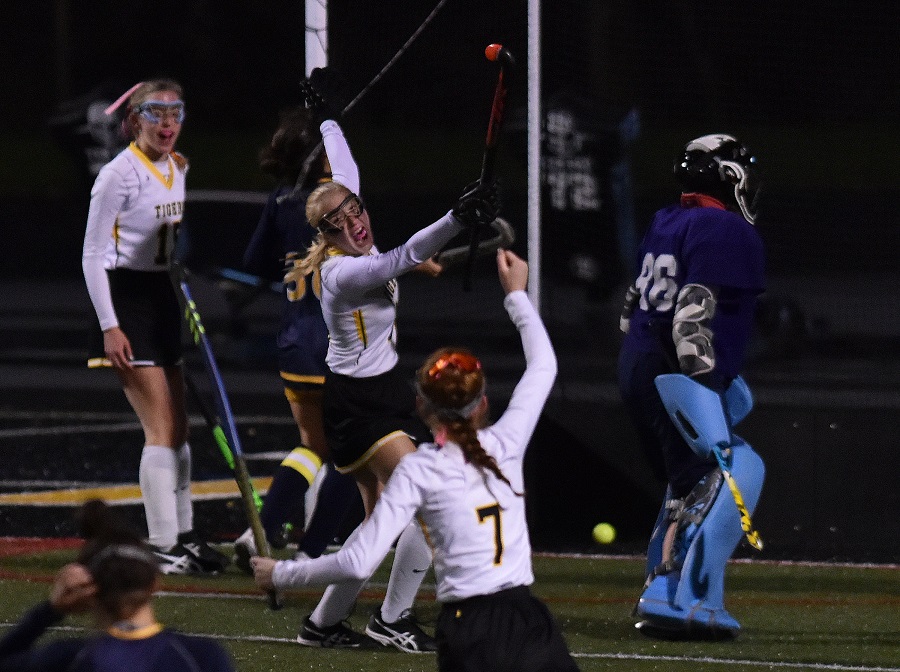 In the early going, Mt. Lebanon had a golden opportunity to take the game’s first lead with a penalty corner eight minutes into the contest but a shot from junior Cara Lynch missed wide left and the game remained scoreless. The Tigers success on defense paid immediate dividends on offense as senior Angie Genter charged down the right wing and feathered a ball to Wachowiak who beat Mt. Lebanon goalie Noel Awad for a 1-0 lead with 21:35 left in the half.

Later in the half, North Allegheny capitalized on a penalty corner when senior Bridget Russell sent a ball in front that was redirected by Wachowiak for a 2-0 advantage with 5:21 on the clock.  Wachowiak’s two goals were her team-leading 17th and 18th on the season.

Looking to protect a two-goal lead in the second half, the NA defense befuddled the Blue Devils for most of the game. In particular, senior Trystan Laughrey made several athletic plays to thwart potential Mt. Lebanon fast break opportunities and earned Wright Automotive Player of the Game honors.

Desperate for a goal, Mt. Lebanon was finally able to solve the NA defense with 2:31 remaining in the game on a goal from senior Julianna Dillon. The score proved to be too little, too late for the Blue Devils as NA spent the remainder of the time in ML territory, winding down a 2-1 win in WPIAL Division I action.

North Allegheny vaults into second place in the Division I standings with a 6-2 record and 10-5-1 mark overall. Fourth-place Mt. Lebanon slides to 4-1-2 in the division and will determine its playoff fate in the Blue Devils’ two remaining games this week. The Lady Tigers can lock up second place in the standings with a win in the regular season finale tonight against Pine-Richland. The game will broadcast live via the internet on the North Allegheny Sports Network.