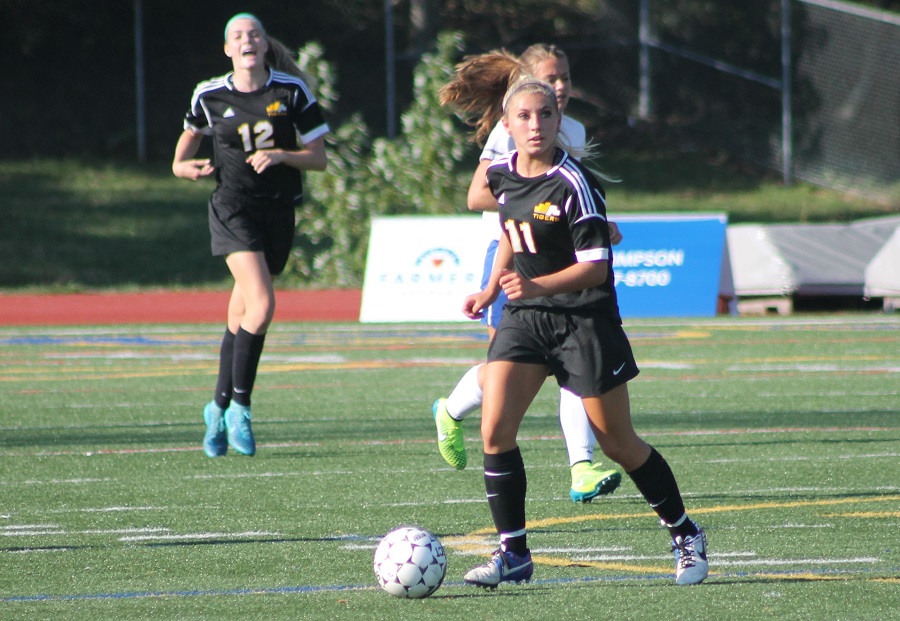 North Allegheny rallied from a two-goal deficit for a 5-3 win over rival North Hills on Wednesday night at Martorelli Stadium. Gabby Smychynsky and Amanda Miller each scored a pair of goals to spearhead the NA comeback.

North Hills entered the night with just one win in Section 2-AAA this season but appeared primed for an upset when Jordan Trama scored in the game’s 1st minute to give the Indians a 1-0 lead. Trama took advantage of an NA mistake in the 25th minute to score again and improve the North Hills lead to 2-0.

The early goals may have stunned the Tigers but the black and gold resiliently answered right back in the 27th minute when senior Marina Thornton passed the ball in front to Smychynsky for a goal and the Indians lead was trimmed to 2-1. Smychynsky’s goal was the first of five straight goals that turned the tide for the Tigers.

In the 37th minute, senior Natalie Lewis fed a pass to Miller who slotted a shot into the far corner to tie the game at 2-2. The score stayed tied until the second half as sophomore Hannah Anderson crossed a ball into the middle where Smychynsky volleyed it into the net to give the Tigers a 3-2 lead in the 42 minute of the game.

North Allegheny pulled away on markers by Miller and senior Morgan Treser for a 5-2 advantage. After making plenty of noise in the first half, North Hills was kept quiet in the second half and managed only one shot on net. That lone shot was good for a goal courtesy of Rachel Haig to bring the score to its eventual final, 5-3, Tigers.

The Lady Tigers leap to 5-2 overall and 4-2 in Section 2-AAA. North Hills slips to 2-6 overall and 1-4 in the section. North Allegheny will visit the Gateway Gators in a non-section contest at 10:00 am this Saturday.