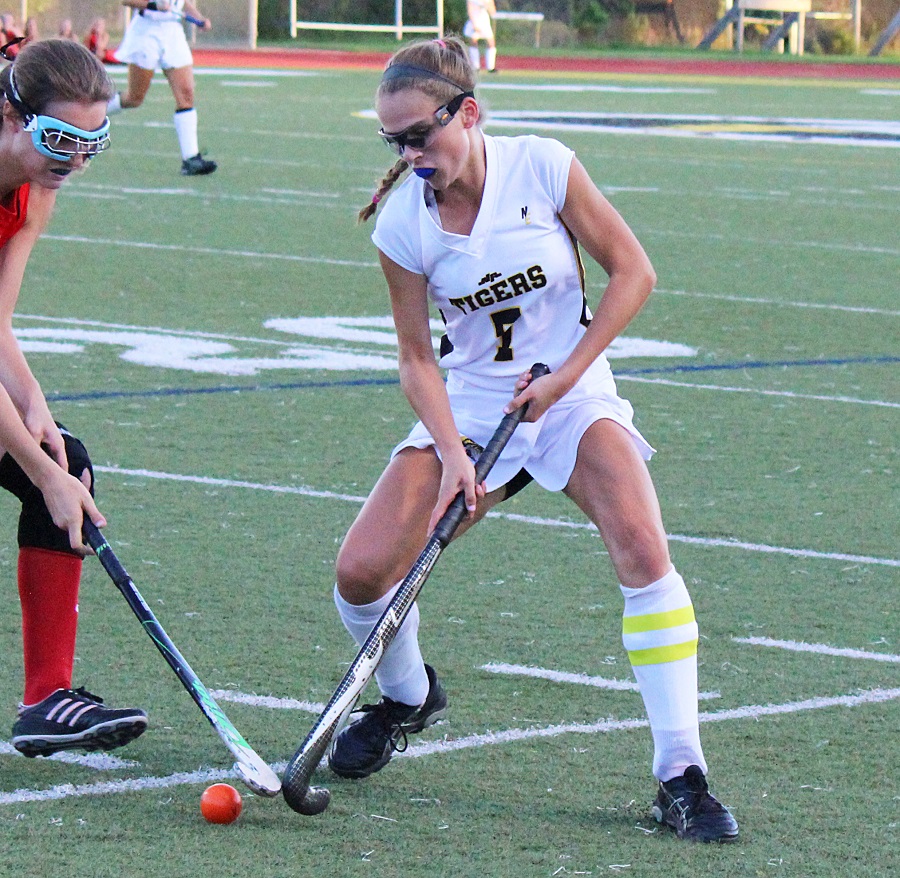 The much-anticipated rematch between the WPIAL champion NA tigers and runner-up Fox Chapel Foxes ended in a lopsided 5-0 victory in favor of the Tigers on Friday evening.  While the score seemed to reflect a blow-out, such was not the case, as the young Foxes team played solid field hockey, holding their own in the mid-field and creating their share of turnovers.  However, the senior-laden, veteran Tiger team could not be contained as they repeatedly pressured the ball into their offensive zone, forcing penalty corners and creating significant scoring opportunities.

Midway through the first half, the Tigers opened up the scoring on a penalty corner when senior Hannah Downing, assisted by senior Kailey Vogl, blasted a shot past the Fox Chapel goalie.  Just four minutes later, Downing took possession outside the Foxes’ circle and capitalized again with a quick and powerful shot deep into the Foxes’ net to put the Tigers ahead, 2-0.  NA would wrap up the first half with another goal following a scramble in front of the Fox Chapel goaltender.  Sophomore Erin Coran poked in a loose ball with an assist by senior Megan Guzzardi to end the half with NA leading 3-0.

The second half would see two more NA goals, the first by Vogl who deflected a shot from junior Maddy Snyder that soared high into the net.  The scoring was finalized when NA senior Jessica Brandon stole the ball and raced downfield, burying a slap shot into the net and solidifying the win.  Throughout the match, seniors Nicole Burns and Alyssa Leonard contributed consistent play, enabling the Tigers to maintain possession and keep the ball in front of the opposing goalie.  The Tiger defense, led by seniors Kendra Downey and Abby Genter, and supported by juniors Jessie Serody and Catie Kelly, neutralized several of Fox Chapel’s serious scoring attempts.  The Tiger goalies, senior Isley “Chip” Smith and sophomore Katie Shideler, combined for 4 saves in the shutout.