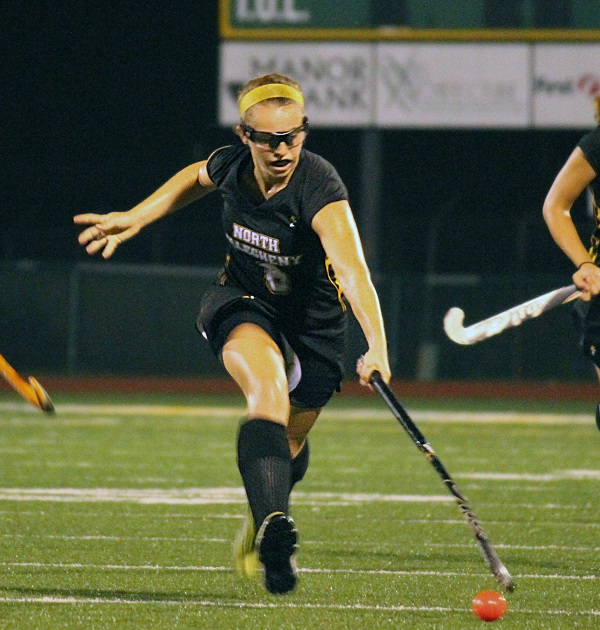 In a nail-biter that would not be decided until the final buzzer, the Lady Tigers won a hard fought battle over Penn Trafford on Wednesday night.  The Warriors took an early lead in the first 7 minutes of play on a goal by Isabella Siergiej, following four consecutive penalty corners that wore down the Tiger defense.  Penn Trafford dominated play throughout much of the first half, breaking up the Tigers’ momentum and gaining the advantage on a large share of whistled fouls.  The half would end at 1-0.

The Tigers refused to allow the frustration from the first half to carry over into the second.  At the 5 minute mark, NA found themselves on the board due to a penalty corner, with a bouncing shot from junior midfielder Hannah Downing that darted into the net to tie the game at one.  Junior Kailey Vogl would tally the next goal halfway through the period, with an assist from junior Nicole Burns after a free hit from the top of the circle, to give the Tigers a 2-1 advantage.  Not to be outplayed, the Warriors would spring back only a minute later, when Karen Postupac of Penn Trafford was able to find the net on a Tiger defensive penalty corner.  The Lady Tigers would apply constant pressure throughout the half, with solid play from Downing, Burns and fellow midfielder sophomore Jessie Serody.  Penn Trafford’s attack was halted numerous times by the steady performance of senior defenders Liza Pucciarelli and Veronica Iriart, along with sophomore Catie Kelly.  Turning the tables on Penn Trafford, NA controlled the midfield through much of the second half.

With the score tied 2-2, it seemed like anyone’s game to win, as both teams pressured the ball toward opposite ends.  The Tigers never allowed Penn Trafford to mount field momentum coming into the Tiger defensive zone, holding their opponent to a total of six shots on goal, all of which came during penalty corners.  The Tigers would ultimately snag the deciding goal with ten minutes remaining, when senior Bre Monnin, assisted by Vogl, blasted a shot past Penn Trafford’s goalie after another solid free hit from Burns at the top of the circle.  The game would end with a score of 3-2 and a collective sigh of relief from the Tiger parent section.  A good overall team effort was exhibited by NA in a game that was a true test of the team’s determination and ability to compete within the Section.

The Tigers will play several games in Hershey, PA on Saturday (9/14/13) returning for back-to-back games against Section 1 teams Hempfield and Norwin on Monday and Tuesday, respectively.  Game time for both Section games will be 7:30 (JV 6:00.)