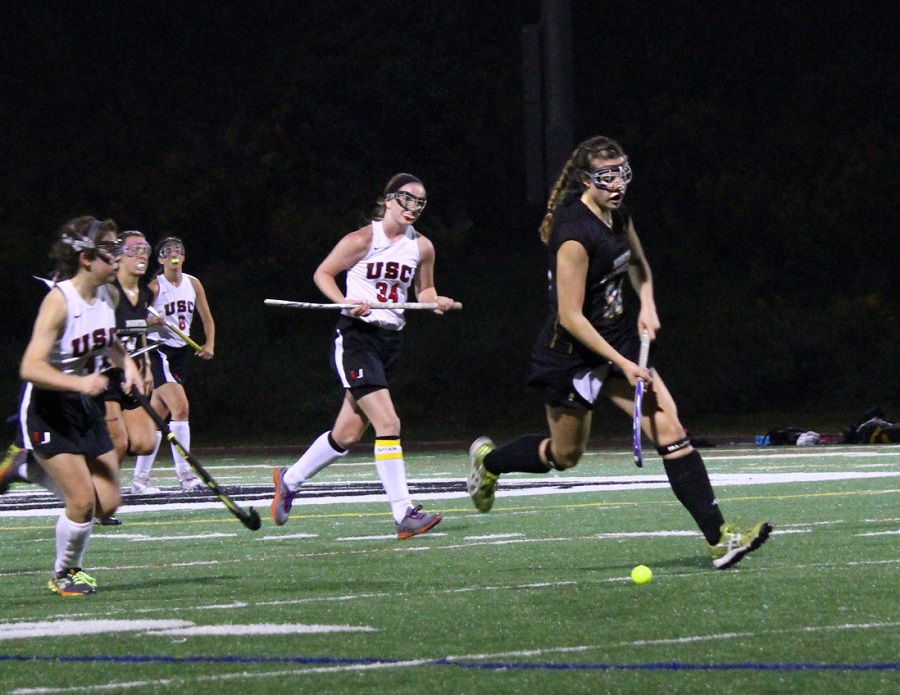 The Tigers displayed an offensive burst at Upper St. Clair on Monday evening, scoring from all over the field, even managing to knock in two goals from outside the shooting circle. In their final non-section game before the playoffs, the Tigers used the game to tune up their post season skills, playing a strong game with good passing and aggressiveness that won them many turnovers of possession.  To USC’s credit, the Tigers were held to a 2-0 lead in the first half, though NA tallied 13 shots on goal.  The Panthers played hard, forcing the Tigers to work harder to maintain the upper hand.  The Tigers kept the pressure on, receiving first-half goals from forwards junior Maddy Snyder and senior Jessica Brandon.

In the second half, the Tigers hustled out of the gates and scored three times in the first 10 minutes. Senior Megan Guzzardi tallied two of the first three goals, and Brandon added her second goal of the night.  One of Guzzardi’s goals was shot from well outside the circle, but was deflected off of a Panther defender’s stick and careened into the net.  Senior Hannah Downing would take a similar slap shot from outside the circle that the goaltender allowed into the net, only to be told by the referee that the ball had touched her stick on the way in, and that goal was also counted.  Brandon would register her second hat trick of the season with 11 minutes remaining in the game, then added a fourth goal just 6 minutes later.  Rounding out the scoring for NA, senior Kailey Vogl would score with 4 minutes remaining, ending the game at 9-0.  USC’s goaltenders would make a total of 19 saves while defending a mind-boggling 28 shots on goal and 13 penalty corners.  Tiger goaltender Katie Shideler would make two second-half saves to keep the Panthers off the board and secure the shutout.

The Tigers face section opponent Pine Richland on Tuesday evening in the final game of the regular season. While the Tigers have wrapped up first place in AAA Section 1, Pine Richland is looking for a win that would secure the Rams a second place finish.  A loss for Pine Richland will keep them tied with Penn Trafford for second place, though both teams have one additional section game to play.  The Tigers hope to wrap up their regular season with a win that would leave them undefeated in section play this season.  The Tigers have given up only one goal in section play, and Pine Richland holds the distinction of scoring that goal, so the showdown should prove to be both interesting and exciting.  The Lady Tigers hope to hear their loyal student fans cheering them on to another victory on Tuesday evening.  Game time is 7:45 (jv 6:15.)  The contest will be broadcast live via the internet on the North Allegheny Sports Network.  To listen, click here.