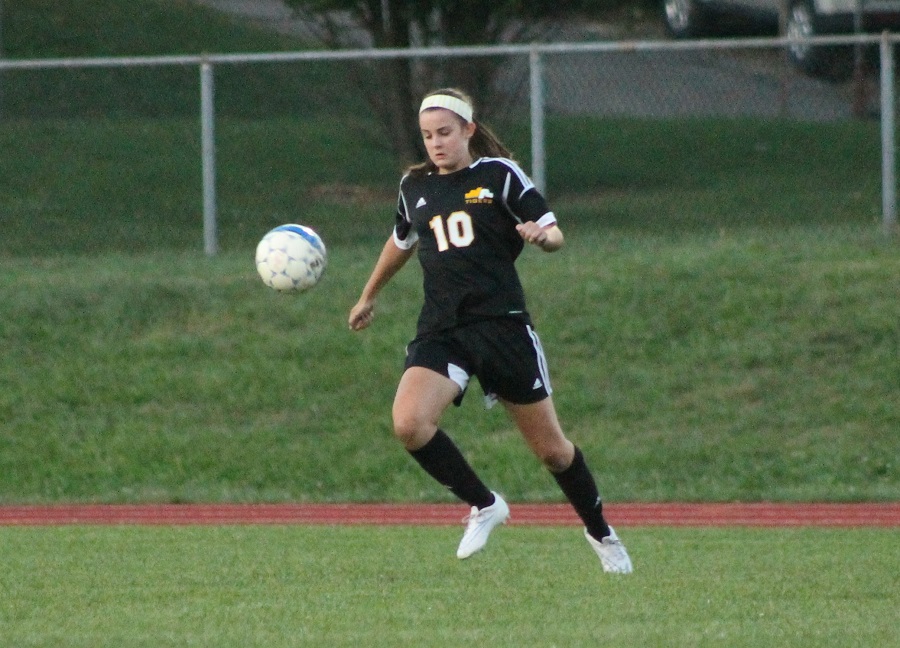 The North Allegheny Girls’ Soccer Team battled with top-ranked Seneca Valley in a tough Section 2-AAA matchup, but the visiting Raiders managed four second half goals for a 4-0 victory over the Lady Tigers.

Similar to their first meeting on September 3, the Tigers and Raiders were deadlocked at intermission, but SV gained control in the second half with four markers. In the earlier game at NexTier Stadium, the game was tied 2-2 before the Raiders pulled away.

In Saturday afternoon’s affair, the Tigers hung tough with Seneca in the early going. However, NA scoring opportunities were limited by a stingy SV defense as the Tigers managed only four shots on goal.  The Raiders peppered NA goalie Emily Lyon with 18 shots and eight corner kicks compared only one corner for the Lady Tigers.

Seneca Valley finally broke the scoreless tie with a tally by Cassidy Testa in the 49th minute to give Seneca Valley a 1-0 lead. Senior Kelsey O’Conner broke open the game with back-to-back goals in the 61st and 67th minutes to increase the SV lead to 3-0. Junior Emily Cekella capped the scoring in the 73rd minute to bring the final to 4-0, Raiders.

Despite the loss, the Tigers are tied for second place in Section 2 with a 5-2 section mark and an overall record of 6-3. Seneca Valley remains undefeated with a record of 9-0 overall and 7-0 in section play. North Allegheny looks to bounce back on Monday night with a visit to section opponent Hampton.  Kickoff is set for 7:30 pm.