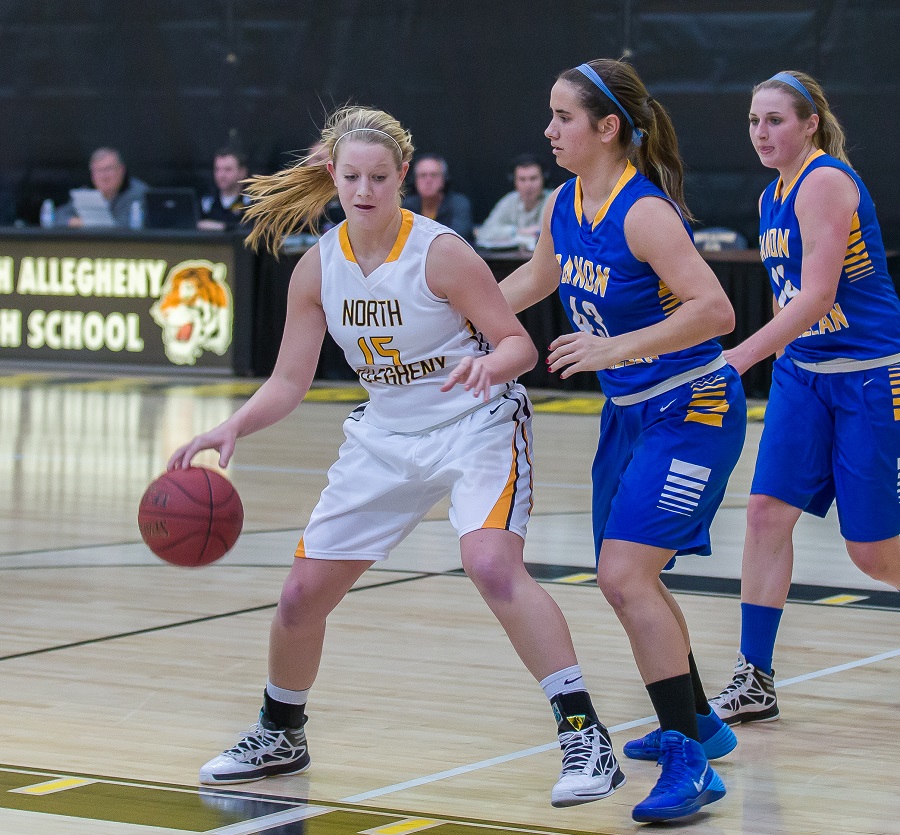 The Lady Tigers stormed out of the gates in the first quarter and never looked back as North Allegheny trampled the rival North Hills Indians on Monday night, 64-36, in a Section 3-AAAA contest. Sophomore Abby Gonzales scored the first seven points of the game to jump start a 17-0 run for the Tigers. Not until 13 seconds remained in the first quarter did North Hills score its first basket, a layup by sophomore Jamie Halloran that cut the NA lead to 17-2.

North Allegheny stretched the lead to 21-2 to begin the second quarter and finished the half with a comfortable 29-14 advantage.  The Tigers constructed their lead with an airtight defense that blocked shots down low and created turnovers up top.  Junior Meg Morningstar blocked three shots in the first quarter alone and Gonzales reeled in six steals to generate numerous fast break opportunities for NA. Gonzales finished the game with six assists and nine points.

In the second half, the Tigers put the game on ice courtesy of senior Taylor Brennan’s outside shooting and sophomore Taylor Lake’s perfect night from the field. Brennan knocked down three treys on her way to a 17 point night.  Lake was 8 for 8 on field goals and drained the only two three-pointers she attempted. With a game-high 18 points, Lake was named the Wright Automotive Player of the Game by the North Allegheny Sports Network.

As a unit, North Allegheny connected on 55 percent from the field and limited the Indians to just 29 percent shooting. Halloran was the top scorer for North Hills with 12 points.  Senior post player Breanna Bertram was held in check, with 1 of 6 shooting and only four points.