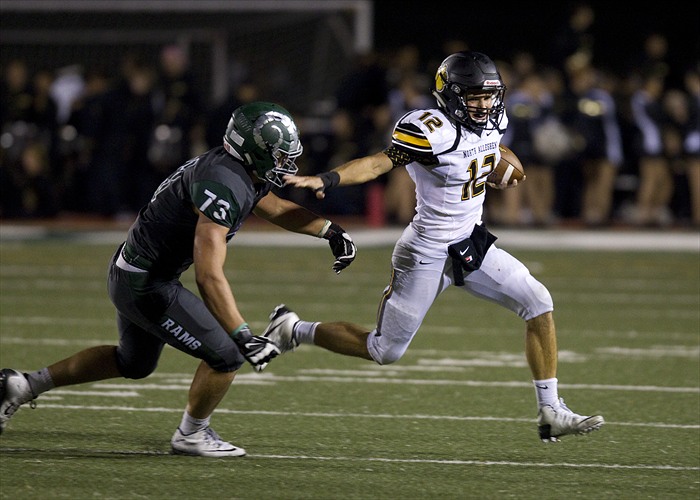 The North Allegheny Tigers locked up second place in the Northern Seven Conference with a convincing 47-10 victory at Pine-Richland on Friday night. Senior quarterback Ethan Maenza accounted for 300 yards of total offense and six touchdowns in the win. For his efforts, Maenza was named the Wright Automotive Player of the Game.

The opening drive for each team stalled in the first quarter but Pine-Richland’s second possession yielded points as the Rams drove 80 yards on nine plays and capped the drive with a 13-yard touchdown pass by Max Divinney to Raymond Falcone for a 7-0 lead. The Tigers answered on the ensuing possession and tied the game at 7-7 on a 25-yard touchdown run by Maenza with 41 seconds left in the quarter.

On the next play from scrimmage for the Rams, senior Niko Mermigas intercepted a Divinney pass and returned it eight yards to the Pine-Richland 32-yard line. Seven plays later, the Tigers scored on a 2-yard run by Maenza to take a 13-7 lead with 9:18 remaining in the second period. The extra point attempt by Ben Cinker was blocked.

The Tigers ballooned the lead to 26-7 with additional touchdown runs of 1-yard and 30-yards courtesy of Maenza in the second quarter. In an otherwise bleak half for the Rams, the home team ended the half on a high note thanks to a 37-yard field goal by Vittorio Orsini to bring the score to 26-10, Tigers, at intermission.

Pine-Richland successfully recovered an onside kick to begin the second half but couldn’t capitalize on the momentum and was forced to punt. North Allegheny effectively put the game away with a time-consuming 17-play drive that chewed up over eight minutes off the clock. The Tigers culminated the drive on a 2-yard run by Maenza to increase the NA lead to 33-10 with 2:12 left in the third quarter.

When the dust settled, Maenza rushed for 132 yards and five touchdowns and completed 6 of 10 passes for 168 yards and a score through the air. Mermigas hauled in three passes for 126 yards and two touchdowns. The Tigers were outstanding on third downs, converting 8 of 12 attempts. NA outgained the Rams, 472-329.

North Allegheny improves to 8-2 on the season with the win and secures a home game in the opening round of the WPIAL playoffs next week. Pine-Richland dips to 6-4 on the year and will also prepare for the WPIAL postseason.