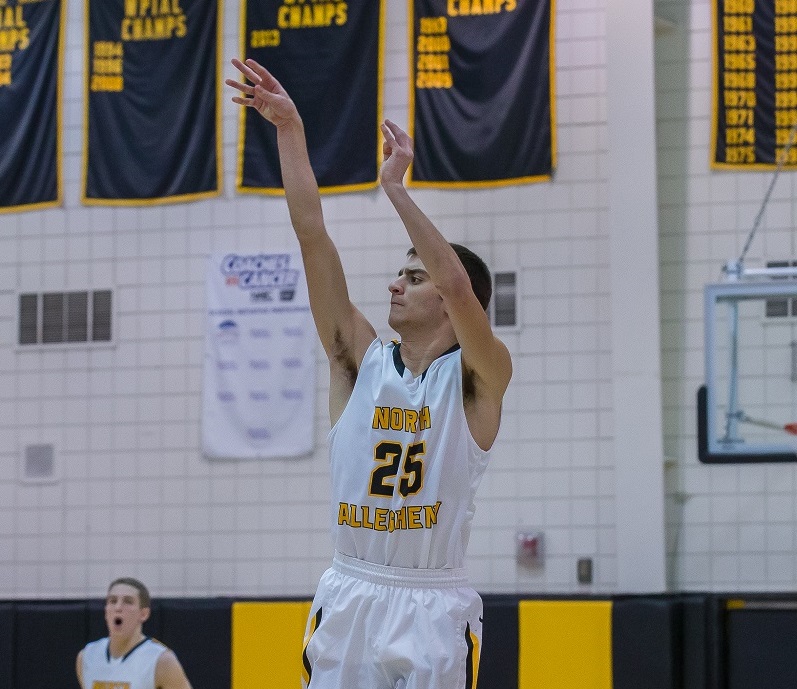 Senior Joe Mancini buried a single game school record 11 three-pointers to lead North Allegheny to a 76-44 victory over the Shaler Titans on Tuesday night in a Section 3-AAAA contest. Mancini tallied 37 points and nearly outshot the entire Shaler team, dropping in 11 of 17 from beyond the arc.  The Titans totaled just 15 field goals for the game.

While the game ended in a blowout, it was the Titans who slowed the game to their liking in the first quarter with deliberate offensive possessions. North Allegheny still led 10-6 after one period but it was Shaler who dictated the pace.

The pace hurried considerably in the second quarter as NA outscored Shaler 26-6 in the period.  The Tigers defense forced the Titans into 15 first half turnovers and Mancini began to heat up, draining six treys in the second quarter alone. At intermission, Mancini had nearly as many field goals (6) as Shaler had attempted shots (7). Mancini was named the Wright Automotive Player of the Game for his record setting performance. (Click here for an audio highlight reel of Mancini’s record night.)

With a 36-12 lead to open the third quarter, the Tigers fed their hot hand and watched Mancini put away the Titans in the second half.  Mancini was the only Tiger in double figures, but leading NA in assists and rebounds was senior David Haus who tallied four assists and five rebounds. For Shaler, Austin Cricthlow was the lone Titan in double digits with 11, scoring all of his points in the second half.

The victory gives North Allegheny three in a row and improves the Tigers to 13-2 overall and 7-2 in Section 3.  Shaler falls to 2-14 overall and 0-9 in section play. North Allegheny will host the Seneca Valley Raiders on Friday night in a game that can be heard live via the internet as the Quad-A Game of the Week.  Randy Gore and Rick Meister will have the call with tip-off slated for 8:00 pm.