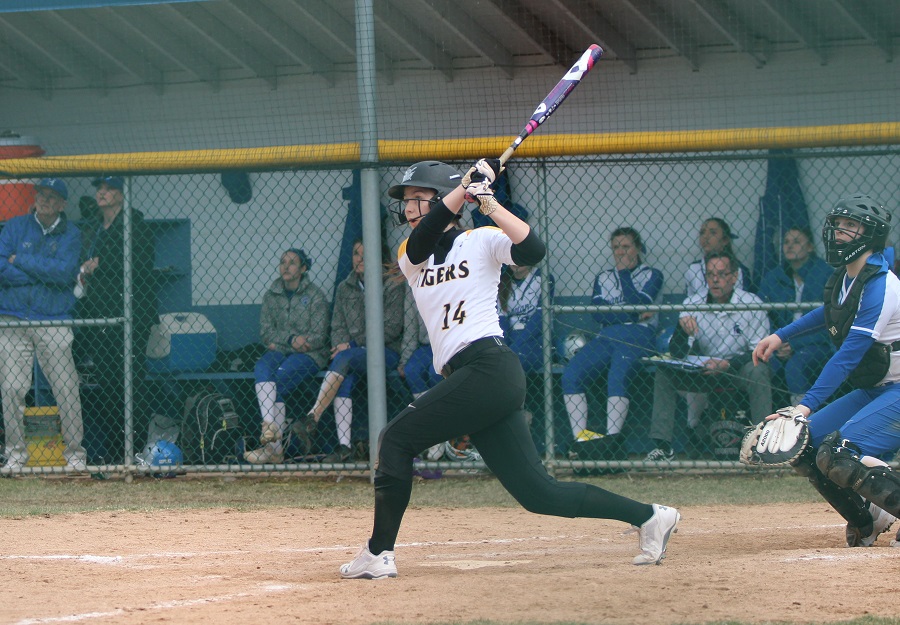 The North Allegheny softball team knocked off the top-ranked and reigning state champion Hempfield Spartans on Thursday afternoon, 11-6, in Section 2-6A action. Senior Rachel Martindale reached base five times, going 3 for 3 with a majestic grand slam in the sixth inning on her way to Wright Automotive Player of the Game honors.

Hempfield scored the game’s first run thanks to an RBI triple by Emma Hoffner in the bottom of the first inning for a 1-0 lead.

Spartans starting pitcher Callie Sowers tossed two scoreless innings to open the game but was touched up by North Allegheny in the top of the third inning. The Tigers tied the game at 1-1 on an RBI single by Regan Brodine and took a 3-1 lead thanks to a two-out, two-run single by Ashley Adams with the bases loaded.

The NA lead was short-lived, however, as Hempfield answered back with a four-run bottom of the third inning. Sowers cut the Tigers lead to 3-2 with an RBI single and Olivia Persin followed with a two-run double to give Hempfield a 4-3 advantage. Hannah Pavsek added on to the Spartans lead with an RBI single moments later to bring the score to 5-3, Hempfield.

Undaunted, the Tigers responded with a two-run top of the fourth inning. Brodine drove in her second run of the game with a fielder’s choice RBI that scored Lauren Harris from third to trim the deficit to 5-4. With two outs and runners at the corners, the Tigers executed a perfect double steal that allowed Martindale to race home and tie the game at 5-5.

The score remained tied until the Tigers broke the game wide open with their big bats in the top of the fifth inning with a six-run frame. Sophomore Chloe Szczepaniak led off the inning with a solo homer, her first of the season, for a 6-5 NA lead. While the Spartans did their best to pitch around Martindale most of the game, they had to face her later in the inning with the bases loaded. The Tigers shortstop made Hempfield pay when she uncorked a deep fly ball over the left field fence for a grand slam and a 10-5 lead. The Tigers added on another run when Brooke Serbin scored on a wild pitch for an 11-5 advantage.

Hempfield scored the final run of the game on a solo homer by Hoffner in the seventh inning to bring the final score to 11-6, Tigers. Hoffner went 4 for 4 with a pair of RBI.

The outcome snapped a seven-game losing streak against Hempfield and marked NA’s first win against the Spartans since 2014.