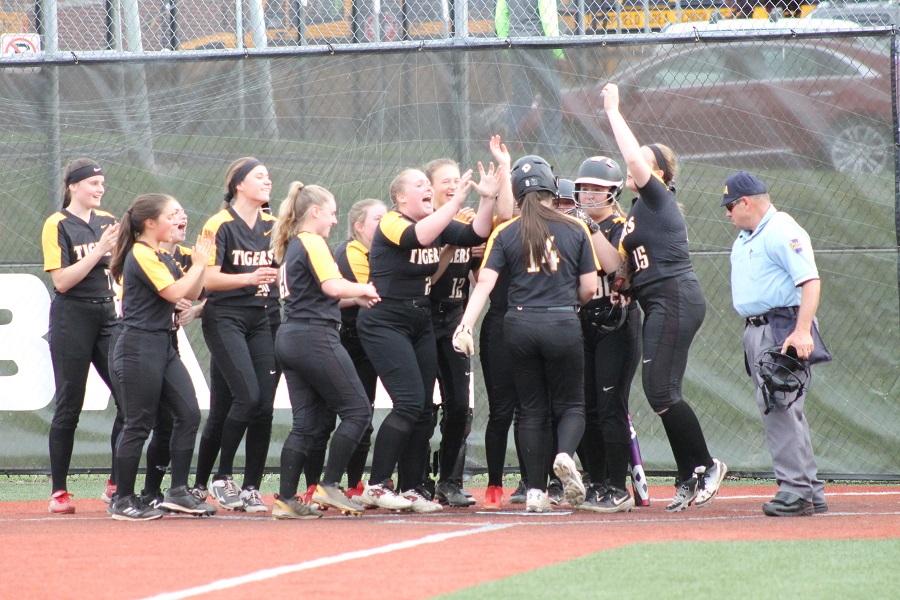 The North Allegheny softball team punched its ticket to the WPIAL championship game for the first time since 2015 with an 8-4 victory over the Norwin Knights on Wednesday afternoon in the WPIAL Class 6A semifinals at Fox Chapel High School. The Tigers will seek their fourth overall WPIAL crown and first since 2006 when they take on Hempfield next week at Peterswood Park. The contest will be held on Thursday, May 30 at 4:30 p.m.

In the regular season, North Allegheny earned a season sweep against section-foe Norwin with wins of 7-3 and 7-4. In the WPIAL semifinals, the Knights struck first in the top of the third inning when Hailee Culbertson scored on an NA throwing error for a 1-0 lead.

North Allegheny promptly answered back with a three-run bottom of the third inning. Senior Regan Brodine tied the game with an RBI single and senior Kristen Chomos gave NA a 2-1 lead with a bases loaded walk. Sophomore Chloe Szczepaniak followed with an RBI single to increase the NA lead to 3-1.

In the fourth inning, Lauren Haywood led off with a walk and advanced to second base on a single from Brooke Serbin. After a sacrifice bunt by Lauren Harris advanced the runners to second and third, senior Rachel Martindale hit her fifth home run of the season, a three-run blast, to increase the NA advantage to 6-1. The home run was the 100th career hit for Martindale.

Norwin would not go away, however, and began to chip away at NA’s lead. In the top of the fifth inning, the Knights loaded the bases and scored a pair on a two-run single by Baile Bertani to cut the score to 6-3, North Allegheny. The Knights could have had a bigger inning if not for the NA defense. Alexandria Brentzel bounced into a 6-5 fielder’s choice and Sara Russell grounded into a 4-6-3 double play to end the inning. A fine stretch by Szczepaniak at first base helped complete the inning-ending double play.

Norwin started another uprising by loading the bases with one out in the top of the sixth inning. For the second straight playoff game, the Tigers turned to reliever Audra Sapp to pitch the team out of danger. Carly Cook’s fielder’s choice RBI cut the score to 6-4, Tigers, but also accounted for the second out of the inning. Moments later Sapp induced a groundout of Victoria Shimko to end the threat and leave two runners stranded.

With Norwin gaining ground, North Allegheny picked up two important insurance runs in the bottom of the sixth inning. Chomos increased the NA lead to 7-4 with a two-out RBI single and Szczepaniak followed with another RBI single to balloon the score to 8-4, Tigers. Reaching base four times total, Szczepaniak went 3 for 3 with two RBI and a walk, earning Wright Automotive Player of the Game honors.

Sapp retired the Knights in order in the top of the seventh for her first save of the season. NA starter Ashley Adams earned the victory with 5.1 innings of work, allowing four runs (two earned) with two strike outs and two walks.

North Allegheny improves to 15-6 on the season with the win. The Tigers advance to the WPIAL championship game next week and also qualify for the PIAA playoffs.

Norwin’s season comes to a close with a 13-8 record.