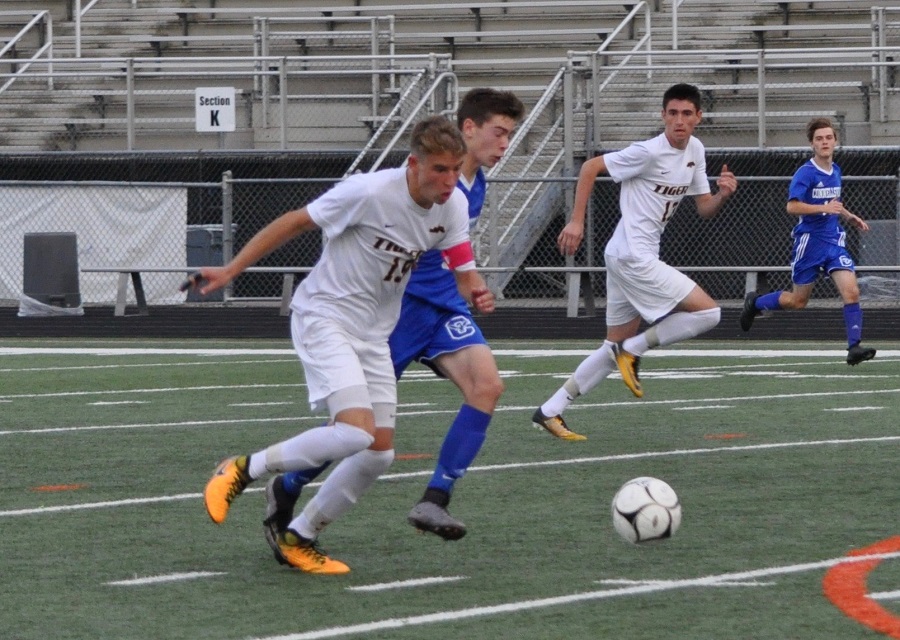 It was a very defensive, intense game for the Tigers in the first round of the WPIAL Boys’ Soccer playoffs. North Allegheny had many chances throughout the game but could not convert until overtime to push through into the WPIAL Quarterfinals on Wednesday with a 1-0 victory over the Connellsville Falcons on Saturday evening.

North Allegheny came out hot getting two corner kicks in the first six minutes of the game. It looked like North Allegheny finally broke through in the 17th minute but Zac Marzula’s shot hit the post and it was still 0-0. Then, with 12:26 left in the first half, Josh Luchini was fouled in the box but his penalty kick was denied by Connellsville goal keeper Alex Shultz and the game remained scoreless heading into halftime.

The Tigers once again came out on fire in the second half getting two more corners in the first three minutes but couldn’t convert. Things became more intense with about 10 minutes left in regulation and this is when North Allegheny’s offense really started to click but just couldn’t catch a break. Nico Ramirez put a shot off the post in the 70th minute, and then with 3:42 left in regulation it looked like North Allegheny finally broke through the Connellsville defense for a goal by Cameron Yurick but the goal was waved off due to an offsides call. The Tigers got one more shot on goal but to no avail and regulation ended with the score still 0-0.

North Allegheny’s back end of Ethan Schenk, Nick Williams, Samuel Neal and Luke Stephen was once again phenomenal as Connellsville did not get a shot off until 8:52 left in the overtime period, and that one shot was saved by keeper Grant Glorioso. With 5:55 left in the first overtime period, Marzula took the ball down the left side and fed Luchini perfectly who calmly put the ball into the back of the net for his 27th goal of the season and advance North Allegheny into the quarterfinals. For his efforts, Luchini was named the Wright Automotive Player of the Game.

The Tigers will be back in action on Wednesday where they will meet Upper St. Clair in the quarterfinals who were 2-1 winners over Plum in their first-round game. Sites and times are to be determined. You can find that information on the North Allegheny Sports Network website whenever the sites and times are released.