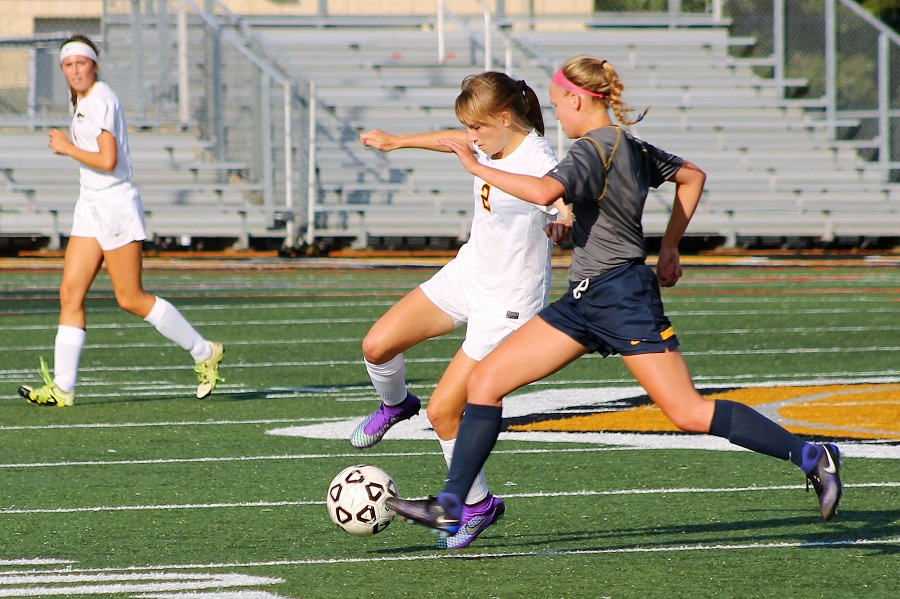 Just two days after knocking off No. 4 Upper St. Clair, the North Allegheny girls’ soccer team produced a scintillating encore by beating No. 2 Seneca Valley on Monday night, 2-1, in overtime. In a thrilling Section 1-AAAA opener, senior Morgan Anderson scored the game-winning goal with 4:58 to play in OT  to lift the Tigers to victory. Anderson was named the Wright Automotive Player of the Game by the North Allegheny Sports Network.

Monday’s matchup between North Allegheny and Seneca Valley pitted two coaches who previously had led the Hampton boys’ soccer program to a state title. SV’s Mark Perry led the Talbots to a PIAA title in 1990 and NA’s Chuck Kelley did the same in 2010. Under Coach Perry, the Raiders captured two narrow 2-1 victories over the Tigers last season. In this contest, it was Coach Kelley’s Tigers who earned a measure of revenge.

The Raiders opened the scoring with a goal by sophomore forward Breanna Valentovish for a 1-0 lead. The Raiders, who owned an 11-10 advantage in shots on goal and a 9-2 advantage on corner kicks, could have held an even bigger lead if not for several terrific saves by NA goalie Olivia Ruppersberger. The senior net minder kept the Tigers within striking distance before sophomore Emma Bundy tied the game with 11:11 remaining in the half.

In the second half, senior goalie Julia Correa continued the sparkling play in net and made a key stop on Seneca Valley’s leading scorer, Julia Redilla, with 28:44 on the clock. The field was tilted in the Raiders’ direction throughout most of the second half, however they were unable to cash in for a go-ahead goal. Valentovish had perhaps the best scoring chance with 10:30 remaining but shot high on attempt from point-blank range in front of net.

Even though Seneca Valley led in time of possession in the second half, the play of NA’s Caroline Wood, Bella Pietropola, Aly Longo, Ava Ruppersberger and Kailey Chomyn, among others, held the Raiders at bay and kept the scored tied 1-1 to force overtime.

In the extra session, the Tigers were granted a free kick from 36 yards out following a foul on Seneca Valley’s Mary Sinan. Pietropola drove the free kick into the box where Alex Adams dished a pass to a wide open Anderson who punched a top-shelf shot past SV goalie Isabella Defabbo for the game-winning goal and a 2-1 victory for North Allegheny.

The win lifts North Allegheny’s record to 3-1 overall and 1-0 in Section 1-AAAA. Seneca Valley suffers its first loss of the season and dips to 4-1 overall and 0-1 in the section. The Lady Tigers will visit Shaler on Wednesday night.