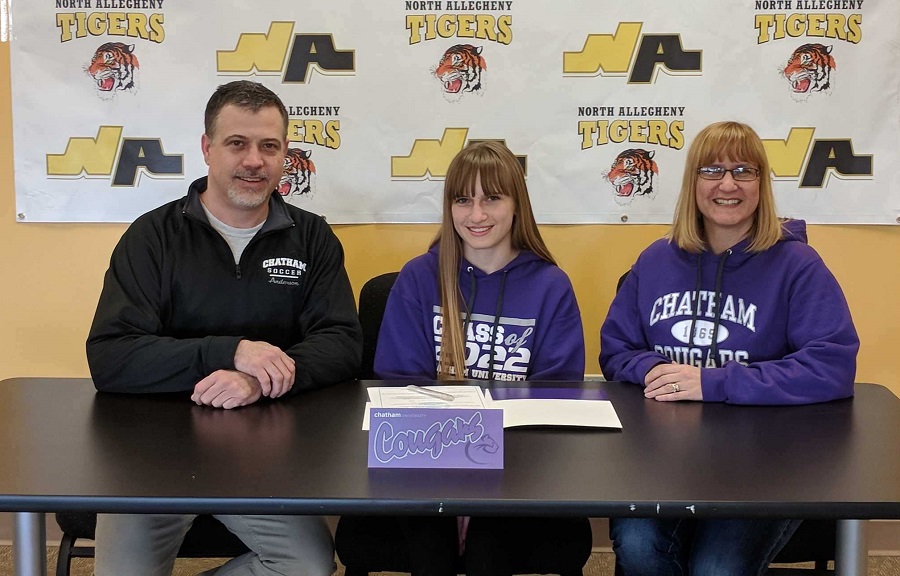 North Allegheny senior forward Morgan Anderson has signed her letter of intent to continue her soccer career at Chatham University. Anderson had verbally committed to Chatham prior to the end of her senior season but made her decision official on Tuesday.

A four-year varsity player, Anderson helped the Lady Tigers to a 14-8-1 record and an appearance in the WPIAL semifinals and the PIAA quarterfinals last season. Anderson finished third on the team in scoring as a senior, posting seven goals on the campaign.  She was selected as a Big 56 Conference and WPIAL all-section pick her junior and senior seasons.

Anderson will join a strong women’s soccer program at Division III Chatham University in the Presidents’ Athletic Conference. The Cougars posted a record of 11-6-1 in 2017 and reached the PAC semifinals before bowing out to eventual conference champion, Thomas More College.

Anderson will pursue a degree in Physical Therapy at Chatham. She is pictured above with her father, Eric, and her mother, Julie.