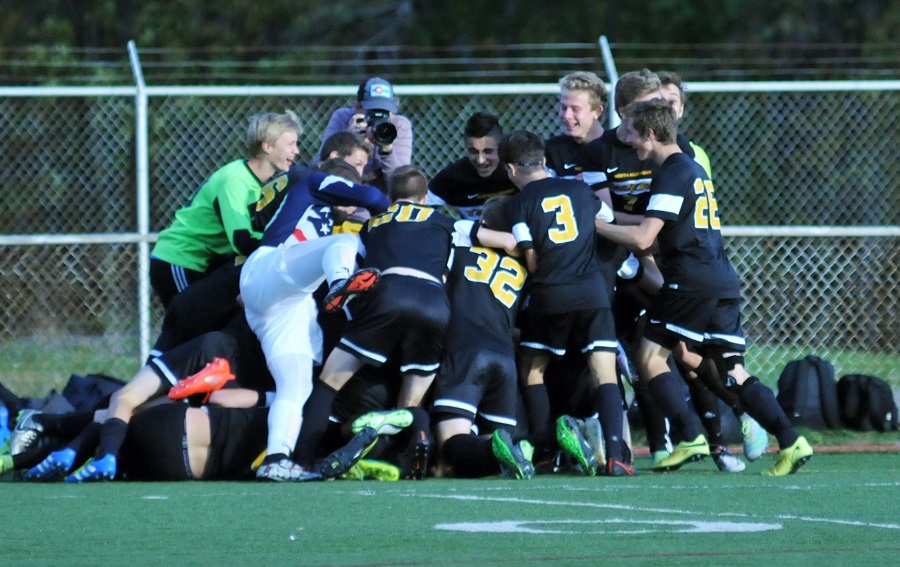 NA Advances To Title Game With OT Win Over Pine-Richland

The North Allegheny Tigers have played in close games all year and Saturday’s WPIAL semifinal contest with Pine-Richland was no exception.  The Tigers played in their eighth overtime game of the season and stayed undefeated in those game.  The Tigers scored with 9:51 left in the first overtime to defeat Pine-Richland, 1-0, and will move onto the WPIAL championship next week at Highmark stadium. (See video of game-winning goal below.)

The Tigers were swarming early and Sean Atwater missed an opportunity two minutes in when he shot the ball wide.  The game continued to be played tight with neither team creating scoring chances.  Pine-Richland’s Nicholas Schiedler  came close to scoring with fifteen minutes left in the first  had a golden opportunity but goalie Grant Glorioso was up to the challenge to smother the shot.  A few minutes later, the Rams’ Niko Marsh just missed a header and sent his shot wide.  Both teams only had one shot on goal in a scoreless first half.

In the second half, the Tigers’ Ben Cinker was stopped by a great save by Tom Fest nine minutes in.  Neither team could muster many opportunities because of the defense on display.  The overtime started and Pine Richlands Carlo Tozzi was stopped by Glorioso in the first minute.  Then came the winning goal. A good throw-in by Alex Goto into James Nolan who was fighting for space with a Pine-Richland defender and the ball was deflected onto the foot of Atwater who rifled the winning shot from 27 yards out for a 1-0 NA victory.  With that goal Sean Atwater was named the Wright Automotive player of the game.

The Tigers will now face rival Seneca Valley for the championship.  The Tigers are one of only three teams to score against Seneca Valley all season.  Pine Richland will move on to play Upper St. Clair for the No. 3 seed in the upcoming PIAA playoffs.