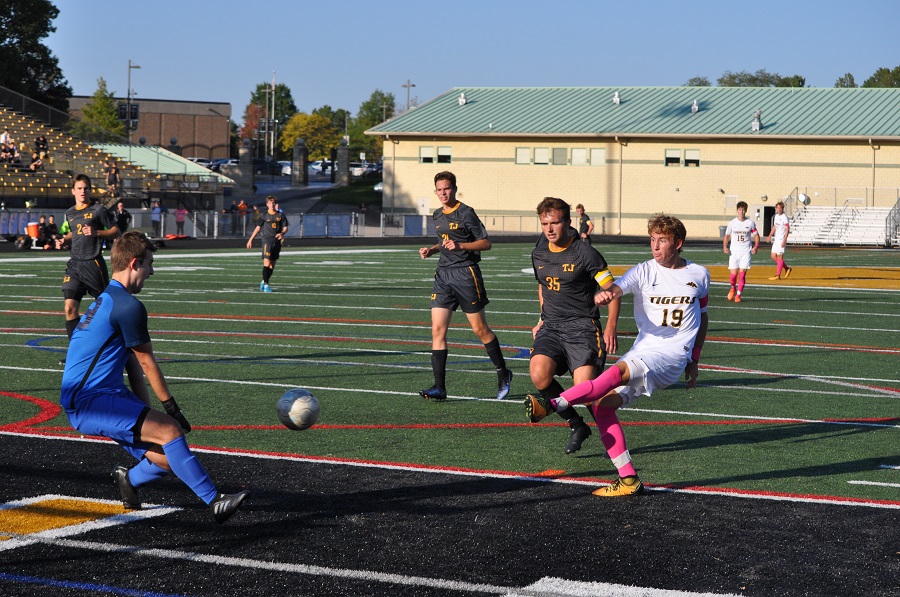 Visiting Hampton scored a goal at 25:59 to take a 1-0 lead over the Tigers with their only shot on goal in the half.  North Allegheny’s offense was held in check with Hampton’s defensive trap aiding in eight offside calls on the Tigers. North Allegheny was finally able to break through at 19:06 when Cam Yurick found Luchini over the  top of the defense and Luchini’s shot overpowered the Talbot goalie to tie the game 1-1 with North Allegheny’s only shot of the half.

In the beginning of the second half, the Tigers continued to possess the ball but still had no shots on goal until Luchini pounced on a Hampton clear at 20:32 and scored from 20 yards out for a 2-1 lead.  Minutes later, Nico Ramirez found Luchini with a deftly placed through ball at 16:42 that Luchini buried for his third goal of the game.  Not to be outdone, Sam Wilson again made a superb pass to Luchini cutting through the defense for his fourth goal of the game and his 26th of the season for a 4-1 advantage.  Drew Hunker, Austin Smith and Nikolaj Hindsbo all contributed valuable minutes in the second half.

North Allegheny finishes the regular season with a 15-2-1 record along with a 9-0-1 section record.  The Tigers will be advised of their WPIAL playoff seeding and pairing later in the week.